Backstop is a rhinoceros transforming Autobot and old teacher of Snarl and Scourge from Transformers: Cybertron. He was voiced by Scott McNeil.

Years ago, when Animatron was being ravaged by raiders, Backstop taught the young warriors of Jungle Planet, including Snarl and Scourge, the ways of peace and honour, hoping the philosophy of "peaceful aggression" would usher in a new age for their people. To Scourge and Snarl, Backstop was like a father. However, when Scourge took the fight to the raiders, Backstop protested this, as it would cause a cycle on vengeance which would lead to more suffering. Scourge left his master's side, and Snarl went with him, deciding to stand by his friend rather than his master. Even though they defeated the raiders, Scourge ruled Jungle Planet as a tyrant.

When Overhaul arrived on the Jungle Planet and was injured, he rescued him, though Backstop was surprised to see a Transformer with a veichle mode. Overhaul would explain he was from Cybertron, the Transformers ancient original homeworld. Overhaul told him that he came looking for a Cyber Planet key to save the universe, and he had no reason to doubt his intentions. And as soon as Optimus Prime decided to face Scourge in battle, he told Scourge he was able to determine the time and place. And when Optimus beat Scourge, he gave him the Cyber Planet Key. And after Megatron became Galvatron and stole the Omega Lock goal to widen the black hole, he joined the fight against him with old students and other inhabitants of the Jungle Planet. And then when the black hole and Galvatron were destroyed, he joined the space bridge building team with Evac and Lugnutz. 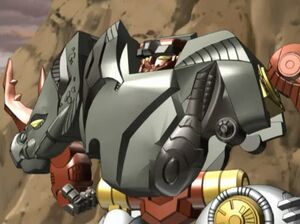 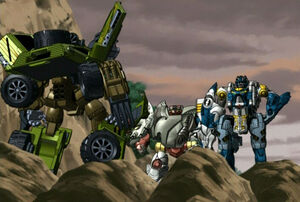