Bad Mr. Frosty is the overall protagonist of the Clayfighter video game series. Initially a a hot-headed villain, he later switches sides in later installments after coming to his senses. Alongside the Blob, they are the only characters that have appeared in all games to date.

Initally, Bad Mr. Frosty was a hot-headed villain, quite ironic for being a snowman. Despite this however, he held friendships with heroic fighters such as the Blob and Tiny, and when the latter won the tournament in Clayfighter, he had a sense of satisfaction and began to have second thoughts about his alignment.

In Clayfighter 2, while still considering himself a villain initially, he quicky reconsidered his actions when a tournament he entered with his friends and rivals, and as a result, it made him permanently put aside his villainy and seek therapy to stop his hot-headedness.

By Clayfighter 63 1/3, Bad Mr. Frosty had ultimately switched to the side of good after the therapy he went through effectively "chilled him out". After learning that his lifetime enemy Sumo Santa was planning on taking over the island of Claymodo alongside other villains, he quickly joined a group of heroes led by Kung Pow to help drive off the villains.

Prior to Clayfighter, Bad Mr. Frosty was an ordinary snowman that was not wrathful nor anthropomorphic.

Following a meteor strike, the radiation emitted from the meteorite transformed him into a large, muscular snowman with a hot-headed attitude, and undoing so he put aside his benevolent past and turned to a life of villainy.

Eventually, Bad Mr. Frosty made his way towards the Circus, where he made it just in time for the upcoming and highly anticipated King of the Circus Tournament, a large fighting tournament where the winner would become the namesake title and could do whatever they wanted. Hoping to turn the Circus into his own Winter Wonderland, Frosty eagerly entered the tournament.

Despite having the upper hand for most of the tournament, Bad Mr. Frosty ultimately lost to fellow fighter Tiny, but deep down the loss was not a total disappointment, as both fighters respected each other, and Frosty came to accept Tiny as the rightful King of the Circus.

Sometime after the tournament, Bad Mr. Frosty left the circus and traveled up to the North Pole; there he confronted and battled Santa Clauz.

It is unknown whether or not he became Frosty's archenemy Sumo Santa, but what is known is that the attack did not go very well, leading to Frosty being arrested for trespassing and assault, before being placed into a maximum security prison for his violent crimes.

Bad Mr. Frosty was eventually released, but instead of reforming, he still had the urge to return to villainy once more. Eventually, he found his way into a town called Mudville, which like the Circus, was about to hold its own fighting tournament, in which the winner would be proclaimed the title of "Grandmaster of the Mudville Tournament". Feeling a desire to beat some competing rivals to earn the title, Frosty entered the tournament without hesitation.

The tournament however, took on a turn for the worse when the contestants found themselves fighting against evil alter-egos/clones of themselves. Seeing that these evil versions of the actual fighters had more sinister plans after winning the tournament, Bad Mr. Frosty formed an ad hoc alliance with the other fighters to defeat the evil counterparts.

The "good"fighters ultimately defeated their evil counterparts, and managed to drive out the creator of the evil clones, Dr. Kiln out of Mudville. After a brief celebration, Mr Frosty left Mudville to seek therapy when he realized that villainy was not worth it, that way he could live out a life in peace.

The therapy Bad Mr. Frosty had undergone proved to be successful, and the once hot-headed snowman had given up villainy and "chilled out".

To celebration his triumphant return, Bad Mr. Frosty alongside a group of his friends decided to celebrate by taking a cruise trip aboard the S.S. Manure. However, disaster struck when the cruise ship capsized off of the Clayhamas. To make things worse, a second meteor struck the nearby island of Claymodo, bringing about a new group of villains led by Dr. Kiln who aspired to take over the world.

Having a sense to stop these old and newfound villains, Bad Mr. Frosty joined a rebellion of heroes led by Kung Pow to counter their villains' offensive.

During the confrontation, Bad Mr. Frosty battled his long-time archenemy Sumo Santa, who wished to help Dr. Kiln drive the heroes off the island so that he and his elves could make evil toys that rivaled his good counterpart.

Bad Mr. Frosty, alongside his friends successfully defeated the villains and drove them off the island for good. After a celebration, "Bad" Mr. Frosty ultimatelly decided to leave the island and travel north where he chose to call home and relax. Frosty however is warned that he should not get too comfortable, as he is warned that "evil is always around the corner". 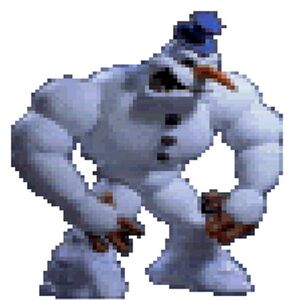 Add a photo to this gallery
Retrieved from "https://hero.fandom.com/wiki/Bad_Mr._Frosty?oldid=1699406"
Community content is available under CC-BY-SA unless otherwise noted.