Parental Disciplinarian
Baek Doo San (Korean/Hangul: 백두산; Hanja: 白頭山) is a character in the Tekken series. Baek first appeared as a villain in Tekken 2, and he has returned for most titles with the exception of Tekken 3 and Tekken 4.

In Tekken 2, Baek first appears as Marshall Law's Stage Eight sub-boss. The reason for this is that Baek Doo San went on a rampage after accidentally killing his father. Baek destroyed many dojos, including the ones owned by the Laws. In Tekken 3, Baek is not present but he was, in a sense, replaced by his pupil, Hwoarang.

Baek is described in the second game as evil due to being traumatized for killing his own father in their sparring session and was responsible for destroying the dojo including Laws. This behavior soon subsided in his ending where he forgives himself for killing his father.

However, from Tekken 5 and onwards as the master of Taekwondo, Baek shows as being serious and a good man but being a strict person, especially to his student Hwoarang. He also disapproves of Hwoarang for street hustling as seen from his ending in Tekken 5. He is also shown to be a risk-taker as seen in his Tekken 6 ending where he saves Hwoarang at the cost of his life. Therefore his sorrow and his traumatized past still remain within him as he still remembers how he killed his father in his ending in Tekken Tag Tournament 2.

Baek Doo San, a master of Taekwondo, is the son of a former Taekwondo champion. At a young age, Baek learned the ways of the traditional Korean martial art and won many tournaments, until an injury forced him to take a leave. Around the same time, Baek's family was plunged into poverty, increasing tensions. Through this rage, Baek accidentally killed his father during a sparring match. Grieving and full of remorse, Baek was taken into police custody, where he spent most of his childhood. During this time, his TaeKwonDo skills became legendary, as he became totally focused on his fighting prowess, wishing to honor his father. After three years, he fled the police and took to the streets, becoming a pit fighter of great strength. He became a firm audience favorite after striking his opponents again and again to see them reduced to a bloodied mess. Tracked by a secret organization aware of his past, Baek was coaxed into the assassination of the owner of a property wanted by the group, a certain Marshall Law. Baek was only partly successful, and he entered The King of Iron Fist Tournament 2 to finish his task and destroy Law.

According to the Tekken 3 storyline, Baek was presumed dead after encountering Ogre, the Aztec God of Fighting. One of his closest students, Hwoarang, entered The King of Iron Fist Tournament 3 to exact revenge for his master's death and to also have a rematch with Jin Kazama, the only fighter who had ever fought him to a draw.

It was revealed in Tekken 5 that Baek's encounter with Ogre had left him in a coma; not dead as initially presumed. He woke up in a military hospital over a year later (after Hwoarang had competed in The King of Iron Fist Tournament 3). Soon after Baek wakes up from his coma, the Korean Defense Minister asks Baek to train soldiers and Baek hesitantly agrees. Baek then began teaching TaeKwonDo at military bases. Around the same time, Hwoarang was drafted into the South Korean Military, but he ran away to compete in The King of Iron Fist Tournament 4. When Hwoarang was arrested by the South Korean Military Police, he was informed that Baek was alive.

About a year later, Baek writes Hwoarang and asks him to return to the military and join the King of Iron Fist Tournament 5 together with him. However Baek withdrew from the tournament, when he found out that Hwoarang lost from his rival Jin and was seriously injured. Baek then rushed to the hospital to visit Hwoarang. Although Hwoarang's condition wasn't considered as something serious after his treatment, he wouldn't wake up and Baek started blaming himself for being an inadequate instructor.

It took Hwoarang three days to regain consciousness. They discussed the details, and Hwoarang told Baek that he not only has to recover, but he has to strengthen himself even further. Baek sensed his strong will and his unprecedented modesty, and hence he decided to teach him everything he knows. Baek and Hwoarang returned to Korea, and endeavored to practice intensely. Eventually, the announcement of The King of Iron Fist Tournament 6 came from the Mishima Zaibatsu, and Baek decides to enter the tournament one last time to widen his personal experience-collection. 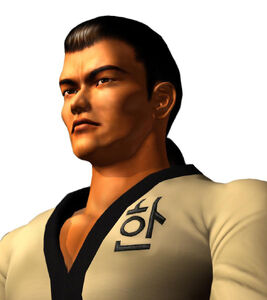 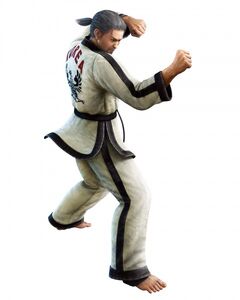