Bags (by Baloo and Louie; in Jungle Cubs)

Keep Mowgli safe and return him to the Man Village (succeeded).

Bagheera is a wise black leopard, a friend among many in the jungle and a "second father" to Mowgli, the man cub. He is the tritagonist of the 1967 animated Disney film The Jungle Book, a supporting character in the 2003 sequel, The Jungle Book 2, and one of the protagonists of its TV prequel Jungle Cubs.

He was voiced by the late Sebastian Cabot in the original movie, who also voiced Lord Ector in The Sword in the Stone, and by Bob Joles in the sequel.

Bagheera was the one who discovered Mowgli as a infant alone in the jungle. He could not raise him himself, and brings him to a family of wolves who just had puppies. The mother agrees to raise him but Bagheera was unsure if the father, Rama would. Rama sees the baby smile and agrees to raise him as his own pup. Bagheera helped raise Mowgli, taking him to the jungle and learning about it. Mowgli considered himself a wolf of the jungle but Bagheera knew that she would have to follow the ways of man someday. That day came when the wolf pack learned that Shere Khan, the tiger had returned and if he learns of Mowgli being in the jungle, he would kill him. Rama had no choice but to let him go but Bagheera suggested he'd be taken to a man-village and volunteered to take him there.

Of course, Mowgli did not want to go but Bagheera was determined to bring him there. They encountered Kaa the python and Colonel Hathi and his band of elephants along the way and almost got killed by them. After several failed attempts to get Mowgli to leave, Bagheera gave up and left him. Mowgli met Baloo and the two became best friends very quickly. Bagheera didn't approve the friendship but did not see any harm to it. When Mowgli gets captured by King Louie and his monkeys, Baloo and Bagheera go and rescue him but got injured in the process.

Later that night, while Mowgli slept, Baloo and Bagheera talked it out about the current situation. Baloo believes Mowgli will be fine in the jungle but Bagheera reminds him of Shere Khan's return and Baloo knew that the tiger would not rest until Mowgli was dead. Bagheera asks Baloo to persuade Mowgli to go to the village to which he hesitantly agrees. When he suggests to Mowgli that he should go, Mowgli became furious and runs off, leading the two animals to search for him.

Bagheera heard Colonel Hathi nearby and asked for his help. Hathi had no recollection of Mowgli and the panther had to remind him again. Unbeknownst to Bagheera, Shere Khan was nearby overhearing the conversation and began to search for Mowgli himself. Hathi refused to search for the man-cub but his wife, Winifred threatened to overthrow him if he does not help find him. For the sake of his own son, Hathi agrees and splits his herd into small groups and had them search all over.

Shere Khan found Mowgli but so did Baloo and Baloo tried to keep the tiger away from Mowgli. Shere Khan had the upper hand and injured Baloo. Mowgli found a branch caught on fire and scared Shere Khan away with it. When Bagheera arrived, she found Mowgli distraught over Baloo's death. She gives a powerful and touching eulogy about Baloo and leaves his body be. Baloo was not dead and asks Bagheera to continue talking about him, which angers Bagheera. Mowgli sees a girl nearby, falls in love with her and follows her into the man-village. Bagheera was glad that Mowgli went to the village and Baloo was sad. Baloo decided to make Bagheera and her new best friend and the two walk off singing "The Bare Necessities".

Bagheera appears in this TV prequel where he is shown as a young cub alongside Baloo, Louie, Hathi, along with Shere Khan and Kaa (who used to be friends with them). 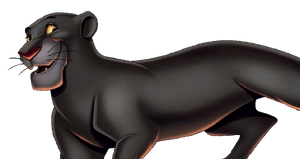 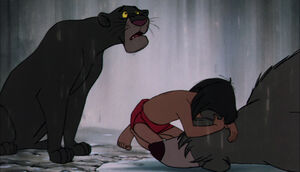 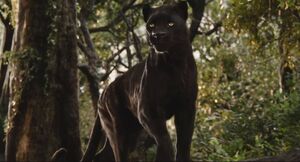 Bagheera in the 2016 live-action movie.