Baki Hanma is the main character and hero of the martial arts Manga and Anime series Grappler Baki. He is the son of the infamous Yujiro Hanma. Baki is also the half-brother of Jack Hanma.

In the anime, Baki is voiced by Masami Kikuchi (seasons 1-2), Nobunaga Shimazaki (third season) in Japanese while in English he voiced by Robert McCollum (seasons 1-2) and Troy Baker (season 3).

Throughout most of the series, Baki is usually shown to be a carefree, laid-back, hard-training, and sometimes aggressive teenage boy.

Baki strives to defeat his father, Yujiro Hanma, who is indisputably considered the strongest man alive, capable of stopping an earthquake with a punch and kill a giant elephant immune to conventional weapons. However, Baki's dream is not to replace Yujiro as the strongest man alive, but only to become strong enough to defeat him. This goal stems from a natural desire to surpass his father as well as a desire to avenge his mother, Emi Akezawa, whom Yujiro murdered.

Baki trains on a near constant basis, day and night, attempting to hone his skills as quickly as possible. As a fairly well-known martial artist (amongst those aware of the Underground Arena), Baki frequently tends to get into fights with various extravagant fighters quite often, sometimes being intentional, others by circumstances of bad luck (usually the latter). Baki realizes that the fastest and only way for him to get stronger is to battle other people stronger than himself, so his body will get stronger and learn from the experience, because this is an aspect of the Hanma bloodline. Baki has a strong sense of love and respect for those close to him, especially his girlfriend Kozue Matsumoto.

He eventually develops the demon face on his back when fighting his brother, but only for a fleeting moment. Unlike Yujiro, he chooses to control his killing intent and fight his battles fair and honorably no matter what the outcome. Many of Baki's unusual training methods often earn him the admiration of many of the fighters of the underground arena; for example, shadowboxing, or visualizing fighting an opponent, is a big part of Baki's regimen - sometimes, his visions take an almost corporeal form and given he can easily remember and replicate any technique he sees this gives him a huge edge over his opponents, as he can "fight" them and learn their weaknesses before actually fighting them.

Baki's strength is constantly growing throughout the series. Baki's intial introduction at the very beginning of the series, 17 year old Baki was already the champion of the Tokyo Underground Dome. At the beginning, Baki was shown to benchpress over 320 lbs when training. At first, Baki was shown to be on the same level as Mount Toba, a wrestler who was shown to be strong enough to easily defeat Hanada and crush his bike in the process. 18 year old Baki's strength grew more, until he was strong enough to face Kureha, and defeat him. As Baki's never stops getting stronger throughout the series, it is difficult to set a definitive level to his strength. At the start of the anime, Baki at age 13, was able to defeat 37 of 100 thugs by himself. When he confronted the huge Yakuza boss Hanayama, he was shown to effortlessly overpower several men trying to hold him back, and kick Hanyama's 250 lb desk out the window with ease. He was shown fast enough to catch a knife thrown at him from 15 feet away. Baki's strength increased more during his fight with the mercenary Gaia, when he learned to utilize his endorphins to boost his strength and speed. When he activates his endorphins, it also allows his body to, react and move on its own, without his conscious effort. By the time 13 year old Baki faced Yujiro, Baki was shown strong enough to tank Hanayama's punches (which are powerful enough to split a fence open), without damage. He was able to push Hanayama's 350 lb body 30 meters away with a punch, and proved to be faster than Yuri's boxing, by easily dodging all his punches. Baki had enough stamina to fight for 12 hours straight with Hanayama and Yuri without stopping, all while wearing a 45 lb training belt, proclaiming the 12 hour session as a warm-up.

In the sequel New Grappler Baki, when Baki is now 17, Baki has shown much improvement. While in gym class, Baki was shown to do 10 pull-ups in 2 seconds (breaking the pull-up bar in the process), jump 20 ft in the air over a 20 ft gap from a standing position, and broke his arm cast into pieces by simply flexing his arm. He was fast enough to effortlesly dodge a thug's chain weapon with a rock attached to it for blunt damage, while the thug was able to swing his chain at speeds of over 100 mph. He also took a knife out of another thug's hand without the thug even seeing him do so (despite the fact that the thug could swing his knife back and forth in his hands at imperceptible speeds to the human eye). Baki fought one of the escaped superhuman convicts, Sikorsky and won easily by smashing his genitals. His fight was interrupted twice by Oliver. Baki was shown to able to kick Oliver who weights 180 kg using a back kick. Baki also fought with two escaped convicts at once, Sikorsky and Yannagi, and was able to defeat them easily. When Baki was poisoned by Yannagi, he participated in the Chinese Tournament and cured his poison. His body was renewed and Baki remarked that his body feels light like a feather. Baki easily defeats Kaku Shunshei in 2 seconds without the opponent landing a hit. It should be noted that by this time in the story, Baki can be considered one of the strongest characters in the Grappler Baki series, with his strength, speed, stamina, and arsenal of techniques being superior to mostly everyone else (excluding Yujiro Hanma, Biscuit Oliver, and Kaku Kaioh). 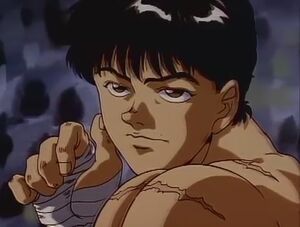 Baki in the Ultimate Fighter OVA. 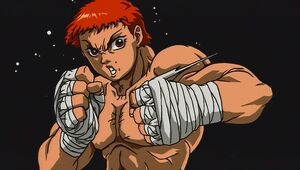 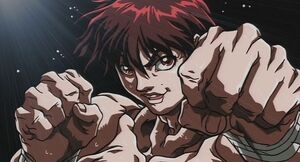 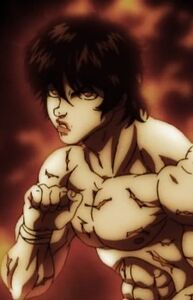 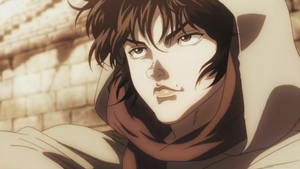 Baki in the third season of the anime.
Add a photo to this gallery
Retrieved from "https://hero.fandom.com/wiki/Baki_Hanma?oldid=1970453"
Community content is available under CC-BY-SA unless otherwise noted.