Bakumaru is the main protagonist, a mouse and the leader of the Eto Rangers. His Eto Ranger designation is 1 because he came in first in the race that decided who would become Eto Rangers.

When he, Cream, Tart, Monk, and Pochiro are selected to travel the first Novel World called Momotaro. He and the heroes met a boy named Commander Momotaro. During their meeting he and the heroes were attacked by enemy spaceships. During the fight against them, he was able to best them by firing them. Upon the arrival in the Demon Planet, he and the rest of our heroes are ready to fight many mechanized demons within seconds. After besting many robotic demon aliens. he and the heroes confronted Red Oni just before saving Commander Taro. When he and the heroes were about to be killed by Jyarei Monster; but, they were saved by Hols and Gao. Thus completing the mission, he and the heroes managed to finish Jyarei Monster off with Kirinda. The Novel World of Momotaro was brought back to normal. After the victory, Bakumaru was able to receive the lightsaber.

Bakumaru is drives by a strong sense of justice and heroism, having accepted his duty as an Eto Ranger. He can get pretty reckless, such as charging straight into battles that he can't win himself. He can also be egostical, sometimes believing he does all the work, but he still remains a nice person at heart.

Bakumaru originally had ailurophobia (fear of cats, which makes sense because he was a mouse). When he first encountered Genen (a cat), he literally fainted while standing. However, in Episode 21, Gao helped him get over his fear and Bakumaru was able to confront the enemy.

Bakumaru is a skilled fighter, skillfully dodging attacks and even using the enemies' heads as stepping stones to defeat them in Episode 2.

However, Bakumaru's main fighting style is using his lightsaber (which he got from Momotaro's Novel World in Episode 2). He has developed many techniques such as the Reckless Cut attack, which he spins his lightsaber like a fan to deflect enemy attacks.

A final attack he developed in Episode 21, the Killer Hurricane, involves Bakumaru spinning like a ball to deliver a slash to the opponents. 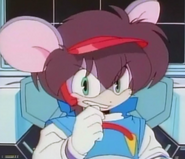 Add a photo to this gallery
Retrieved from "https://hero.fandom.com/wiki/Bakumaru?oldid=1903363"
Community content is available under CC-BY-SA unless otherwise noted.