Leader of The Crusaders

To win the Battle of Eichenwalde (succeeded)

Balderich von Adler was the leader of the advanced German paramilitary organization known as The Crusaders, which defended Germany from an Omnic robot invasion.

Little is known about Balderich and the Crusaders prior to the Omnic Crisis, which took place within the 2040s. In the Overwatch animated short "Honor and Glory", Balderich and the rest of his team are seen defending Eichenwalde from an army of Bastions. He was called to join Overwatch following this battle, which turned out to be greater than expected. The Omnium uprising with their heavy infantry, firepower, and sinister programming, annihilated most of the Crusaders. During the battle, Balderich rescued a wounded Reinhardt, saving his life, blocking fire with his barrier shield.

Soon after, they retreated, and the Omnics followed. There, Balderich decided that he would stay back and take all of the Omnics with him, knowing that there were little chances for his own survival, but there would then be more lives saved. Through sheer willpower, he remained alive, and destroyed every single Omnic that followed them into the castle. After this battle, Lt. Commander Reinhardt would be sent as Balderich's replacement, something that Balderich wished to Reinhardt before death. He died sitting on his thrones-- his remains can still be seen in-game on the Eichenwalde map.

Balderich was a very strong man, likely possessing peak human strength. His armor was massive, and forged with Rocket Thrusters, similarly to the other Crusaders. Since Reinhardt is a Crusader, all of Reinhardt's abilities can be used by Balderich. This includes:

All of these traits have been adopted by Reinhardt, but we never see Balderich use Earthshatter, where Reinhardt slams his hammer onto the ground with enough force to make everyone in front of him fall to the ground. However, we also never see Reinhardt swing two hammers around while charging, but both possess the Charge ability, as does every Crusader.

While Balderich has never been seen outside of his bulky suit of armor, his appearance is likely muscular, due to the size of the armor he wears. From what we can tell from his face, he appears to be a hulking man with a bald face with a large bushy mustache, beard, and light brown greyish-appearing eyes. His armor is designed keeping in mind the theme of a griffin, what appears to be the Crusaders' symbol. Griffins symbolize courage and camaraderie, and are associated with everything they find honorable. Noticeably, there is a fluffy white coat surrounding his neck.

After the armor has aged quite a bit, it appears to have lost its brown and gold coloration, and become covered in greenery. 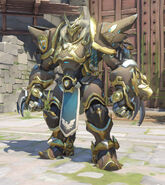 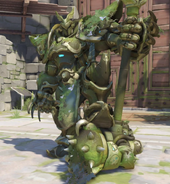 An oldened armor, the Griefhardt skin
Add a photo to this gallery

Retrieved from "https://hero.fandom.com/wiki/Balderich_von_Adler?oldid=2077084"
Community content is available under CC-BY-SA unless otherwise noted.