In the Episode "Cranius Maximus" when Baljeet becomes concerned that he is losing his mental edge, the boys invent a cerebral stimulatory hat, or "Brain booster," to help him. But when the hat exceeds expectations and makes Baljeet exponentially smarter, he suddenly views everyone else as beneath him and becomes a threat to civilization by taking Earth's atmosphere and bringing it to the moon. 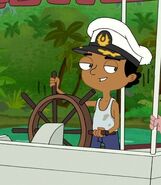 Baljeetolas of the Nerdling Realm

Add a photo to this gallery
Retrieved from "https://hero.fandom.com/wiki/Baljeet_Tjinder?oldid=2127909"
Community content is available under CC-BY-SA unless otherwise noted.