Great Princess of the Forest (until her death)

Bambi's mother was a deer living in The Forest. She was the wife of The Great Prince of the Forest, mother to their son Bambi and paternal grandmother to Geno and Gurri. She is featured as the tritagonist in the 1942 film Bambi in which she raises Bambi and educates him about the forest. She is, however killed by a hunter halfway through the film and appears briefly in Bambi's dream in the film's 2006 midquel Bambi II, which takes place a short time after her death. She was the Great Princess of The Forest and was succeeded by her daughter-in-law Faline. She is very close to Ena who is not related to her. In the first movie, she had sacrificed herself to save Bambi from Man.

She was voiced by the late Paula Winslowe in the first film and Carolyn Hennesy in the second.

Not much is known about Bambi's mother's early except that she and her future husband the Great Prince met as fawns and also grew up with another doe named Mena.

Bambi's mother first appears at the start of the film in her thicket shortly after her son the new Prince's birth and is visited by Thumper, Friend Owl and the other forest animals. She thanks the animals when they congratulate her and encourages her son to take his first steps, which he struggles at. After her son falls asleep, the animals start to leave, but Thumper stays behind to ask what the new Prince will be called to which the doe replies she's thinking of calling him Bambi. From afar, the Great Prince looks down on his wife and son.

During the winter, food becomes scarce, but one day, Bambi's mother finds new spring grass and she along with Bambi eat it. Suddenly, Bambi's mother hears something and tells Bambi to get to the thicket and tells him to not look back and to keep running before a loud bang is heard. Bambi reaches the thicket but notices that his mother is there with him and goes to look for her.

Taking in between the events of her death and Bambi's young adulthood, Bambi's mother is mentioned throughout the film. She is brought up by Bambi who tells the Great Prince about them meeting Faline. The Great Prince (who is deeply saddened by his wife's death) stops Bambi and tells him that it's best to leave the past in the past as a Prince does not look back, only ahead. Whilst waiting for the Great Prince to take him home, Bambi dreams about reuniting with his mother who tells him that she's always with him even if he can't see her, before waking up and hearing her voice saying that she's here. Bambi follows the voice into the meadow only to be faced by Man and his dogs and freezes in fear. Luckily the Great Prince arrives and gets Bambi to safely and reveals that the voice Bambi heard wasn't his mother's but one of Man's tricks. On the way home, Bambi asks his father if his mother's not coming back which the Great Prince confirms.

Bambi's mother is later mentioned when Friend Owl finds a doe named Mena to care for Bambi (as the Great Prince at first only wished to care for Bambi until a doe was found as they care for the young, but appears to have a change of heart) where Mena tells Bambi that his mother and her grew up together.

She is last mentioned at the end of the film, where the Great Prince (after deciding to care for Bambi) show the now teenage Bambi a glade where he says that this was where he first met Bambi's mother and was just about Bambi's age. 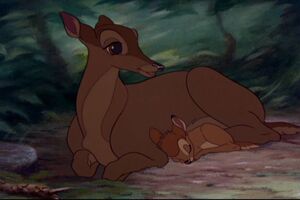 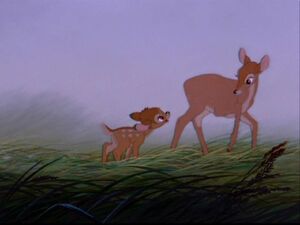 Bambi and his mother in the meadow. 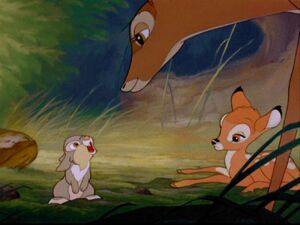 Bambi's mother with her son and Thumper 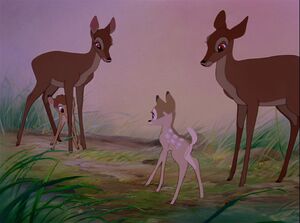 Bambi's mother with her son, her friend Ena and her daughter Faline 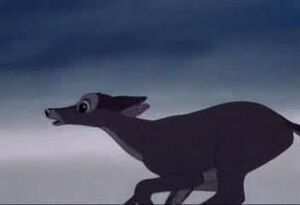 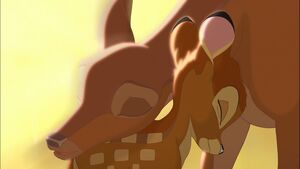 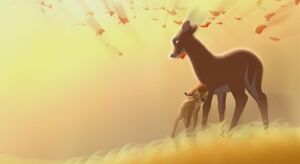 Retrieved from "https://hero.fandom.com/wiki/Bambi%27s_Mother?oldid=1822979"
Community content is available under CC-BY-SA unless otherwise noted.