Obtain eternal life from the Fountain of Youth.

Ban, also known as the Fox Sin of Greed, is the tritagonist of the anime/manga/light novel series The Seven Deadly Sins. He is a member of the Seven Deadly Sins and an immortal human due to drinking from the Fountain of Youth. His Sacred Treasure is the Holy Rod Courechouse. On top of being immortal, he is known for his ability, Snatch.

Ban is a very tall, muscular man with pale skin, who possesses a set of well-developed abdominal muscles and usually slouches. He has short, spiky, pale blue hair and thin black eyebrows, as well as a pair of scarlet-red eyes. On the left side of his jaw and neck, he has a large scar given to him by Meliodas. At the end of the Baste Dungeon Arc, he is shown wearing a red leather jacket and pants with metal studs sewn into both, alongside shoes of a similar, yet darker color.

Ten years ago, Ban wore a full set of red armor with a helmet like the rest of his teammates and wielded either a three sectioned staff or a rapier. During his imprisonment at the Baste Dungeon, his hair had grown past his shoulders and had grown a large beard and mustache. However, soon after escaping his cell, he utilized Jericho's attacks to trim away his facial hair and to reduce his long hairstyle.

Due to losing his shirt during his fight against King in the Capital of the Dead Arc, Ban decided to wear an apron, until he was able to find a similar set of clothes during the Vaizel Fight Festival. His Seven Deadly Sins symbol of the Fox, is located above his waist on his left side. His wanted poster image, which is slightly accurate, depicts him with long hair that extends past his shoulders. The image also display a clear view of his distinctive scar.

Ban is shown to be a passionate man. He take actions based on whatever catches his interest, such as escaping from prison after hearing his captain was alive, and trying to steal Meliodas' sword, Dragon Handle, to discover why it was so important to him He has shown some aspects of greed, as well as selfish desire; however, he will stay his hand if he is given a good reason to stop. He has a strange habit of making singing tones while talking which he developed at a young age after he was adopted by Zhivago.

Despite his selfish and greedy personality, he is also shown to be caring, which is shown when he rushed toward Elaine to save her. Thus, despite being a "bad person", Ban also can be heroic.

Ban is easily surprised and excited, as shown when he discovers Hawk's ability to talk and that the child he was fighting is actually King. Furthermore, when King transformed back into his previous, larger form, Ban was the only one who appeared to be astonished. Ban carries a deep hatred toward the Demon Clan, holding a grudge against them for killing Elaine, and he despises the very thought of resurrecting the clan.

Occasionally, Ban seems to act out of character. When Ban was planning to get the Horn of Cernunnos located under Kingdom of Liones' castle to revive Elaine, he was planning to save the kingdom, and be given the horn as a reward than stealing it for unknown reasons. Additionally, Ban has told the other Deadly Sins to not get into Meliodas' past as it was against their rules. Ban even told Meliodas that killing Dale as he is, was the best thing for him and that he shouldn't be naive. 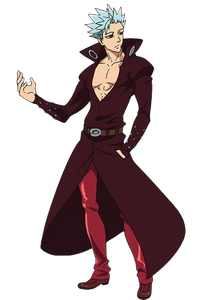 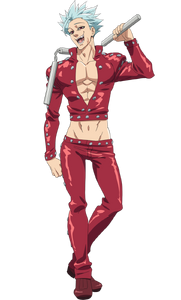 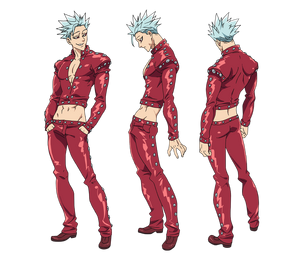 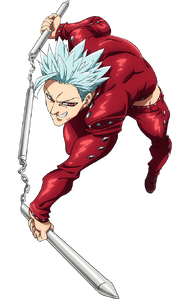 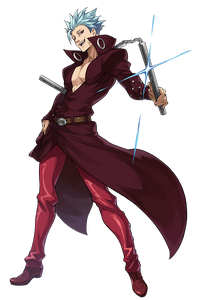 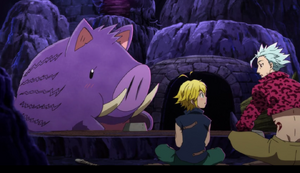 In Purgatory in Dragon's Judgment