Banagher Links is the main protagonist of the Novel/OVA Mobile Suit Gundam Unicorn. A boy who is a student at Anaheim Industry Technical School in the colony "Industrial 7". He is described as seeing war as something akin to fiction, as he was born after the One Year War ended and did not experience the more isolated wars that followed it. However, upon meeting Audrey, he is drawn into a new conflict. He does a part-time job clearing space debris with a miniature MS.

Banagher is a well meaning young man. No matter the circumstances, he cares a lot about the safety and well being of other people, regardless of whether they're fighting with or against him. As a result of his good natured personality, he often tries to hold back when fighting opponents, resorting to non-lethal methods of subdueing them as best he can. At times, he can be a bit naive, such as when he thought to have Laplace's Box handed over to the Sleeves, despite not knowing what its contents and potential consequences would be. Despite this, he holds the belief that people's identities and actions are not bound by blood or familial ties, and that people should have the freedom to find their own path in life. This is heavily reflected in his actions and behavior, such as his insistence on calling Mineva Lao Zabi "Audrey" despite her true identity being revealed to him, caring little about her status as the heir to the Zabi name, and his resolve in freeing Loni Garvey from her bloodthirsty quest for vengeance for the loss of her family at the hands of the Federation, insisting that it was not her duty to enslave herself to the wishes of her father. Ironically, in an almost hypocritical fashion, he questions to the point of personal frustration what his father, Cardeas Vist, had in mind when he gave him the Unicorn Gundam, and how he intended Banagher to overcome the obstacles that lay before him. As such, when he feels lost or questions whether or not what he's doing is right or wrong, he hesitates to take action. However, when he figures out what he needs to do with the power given to him, he's displayed an iron will with little regard to his own safety, such as when he sortied in the Unicorn Gundam to drive off the Sleeves forces in an effort to protect Mineva in spite of the odds stacked against him, or when he angrily beat Suberoa Zinnerman, a man much larger and stronger than him, to convince him of his hypocrisy in allowing the Zeon Remnants to destroy Torrington in light of the circumstances surrounding his late wife and child, even though he was at gunpoint.

Banagher has displayed some proficiency in piloting petite mobile suits. As a technical student, it is implied that he has some knowledge of how to troubleshoot a mobile suit, though the actual extent of his training is unknown. He also has very sharp eyes, such as when he spotted the Unicorn Gundam from a long distance, while Micott did not. Banagher is also a relatively fit teenage boy, and displays some proficiency in hand to hand combat, as he was able to fend off Marida Cruz, an augmented human, and her guards single-handedly.

Banagher is also portrayed as a Newtype with very high potential. He is instantly able to control the Unicorn in Destroy Mode during his first time in the cockpit, effectively dodging beams from a large number of funnels and defeating the NZ-666 Kshatriya in 1-on-1 combat. By 0096, Banagher is already quite spacially aware, able to sense Mineva Lao Zabi in danger and the negative intent in the Sleeves in Industrial 7. He enters several scenarios in which he clearly telepathically communicates with others on the battlefield, some of them already deceased. Additionally, despite the malintent apparently programmed into the NT-D, Banagher learns to exert his will strongly enough to resist the will of the psycommu. Later during the war, he is fully capable of initiating and shutting down the NT-D and the Unicorn's Destroy Mode on his own accord.

His brainwaves are displayed to reach supernatural levels (even by the standards of Newtypes in general), which, combined with the Unicorn Gundam's extensive psycoframe, are able to manifest themselves physically. They are shown to have enough power to move or destroy nearby solid objects and, eventually, enable the use of the Full Armor Unicorn's shields as remote weapons, by manipulating the psycoframe that runs through them. Upon mastering both the NT-D and Banagher's own powers, over time the psycoframe of the Unicorn Gundam changes from red to green, responding to the growing magnitude of his Newtype ability. 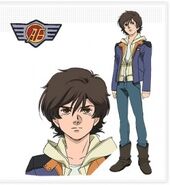 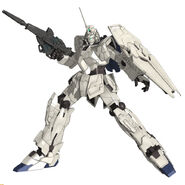 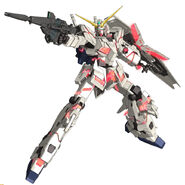 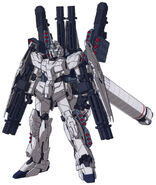 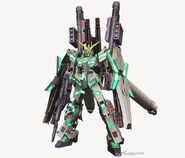 Retrieved from "https://hero.fandom.com/wiki/Banagher_Links?oldid=1900893"
Community content is available under CC-BY-SA unless otherwise noted.