Fighting
Saving Planet Popstar
Hanging out with his friends

Bandana Waddle Dee, also known as Bandana Dee or simply Waddle Dee, is the deuteragonist of the Kirby franchise. He is a Waddle Dee who is Kirby's best friend and King Dedede's right-hand man. He is also the unnamed Waddle Dee who wears a blue bandana.

Bandana Waddle Dee debuts in Kirby Super Star and it’s remake, Kirby Super Star Ultra, as the first opponent in the sub-game Megaton Punch. He then appears in the latter as the secondary antagonist of Revenge of the King and redeemed himself later on.

He also is the one of the main characters of Kirby's Return to Dreamland and Kirby Star Allies, a supporting character in Kirby: Triple Deluxe and Kirby: Planet Robobot, the deuteragonist of Kirby Battle Royale and Kirby Fighters 2, and the tritagonist of Kirby and the Forgotten Land.

He debuted in Kirby Super Star as the first opponent in Megaton Punch.

Bandana Waddle Dee makes a cameo in the sub-game Strato Patrol EOS, cheering for Meta Knight, along with Sailor Dee.

Bandana Waddle Dee appears in Kirby and the Rainbow Curse as a playable character alongside two identically dressed, but differently colored, Waddle Dees. While Kirby is in his ball form, Bandana Waddle Dee controls normally in traditional platformer style, and can assist Kirby as he plays through stages. He can perform actions such as picking Kirby up and tossing him to other players.

He also can thrust his spear in different directions to attack enemies. This is required when fighting Grab Hands, who appear as mid-bosses regularly throughout the game when more than one player is present. Aside from during the final boss battle, they do not appear in single-player mode, because Kirby has no means of defeating them alone. When entering the game and taking damage, one is able to hear his voice clips through the speakers on the Wii Remote.

Bandana Waddle Dee's abilities change when Kirby has a transformation.

He appears as an ally in Kirby: Triple Deluxe and Kirby: Planet Robobot, giving Kirby a special item before facing a boss or mini-boss.

Bandana Waddle Dee sits near the Gem Apple Tree. Kirby can talk to him to receive tips and other information. Every 12 hours, he can harvest Gem Apples that are growing on the tree, giving them to the player.

In this game, he appears as the main deuteragonist of the Story Mode. He joins Kirby to reach and win together Dedede's Cake Royale. He is Kirby's ally during the whole tournament, and helps him to defeat the Kirby Clones (in some battles), the Meta-Knights, and King Dedede.

He returned in Kirby Star Allies as a playable Dream Friend.

Bandana Waddle Dee is one of the starting playable characters in Kirby Fighters 2.

Kirby and the Forgotten Land

Bandana Waddle Dee is playable in co-op mode and is controlled by the second player. During single player mode, he resides in Waddle Dee Town until he is needed to assist Kirby. 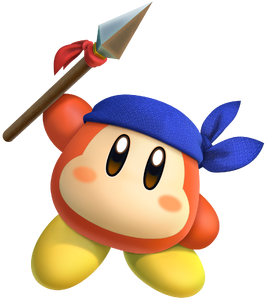 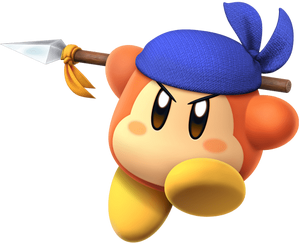 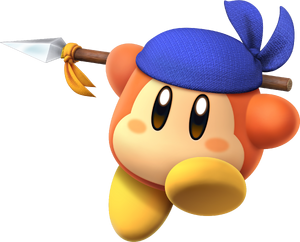 Bandana Dee's artwork from Kirby and the Forgotten Land. 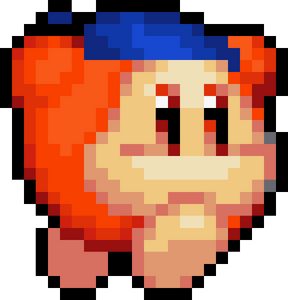