A ninja from Ikaruga

Thinking of names for his special moves.

Bang Shishigami is a hero from BlazBlue who is a ninja from Ikaruga.

After losing his home in the Ikaruga Civil War and his master Tenjō at the hands of Jin Kisaragi, Bang and his followers began living in Kagutsuchi waiting for the right moment to strike back at Jin and the NOL. There, he declares himself a hero of love and justice, and dedicates himself to exterminating evil and overturning injustice wherever he goes. Over time, Tenjo's teaching prevailed over him, and Bang develops a strict 'no-kill' policy, which means he would never stoop so low as to kill his enemies, even Jin, despite how much he hates him. However, he states in his story line that upon meeting Hazama that he must be killed, perhaps meaning that his 'no-kill' policy does not extend to the truly evil.

He has a romantic fascination with Litchi, always willing to go charging in headlong if he sees someone making her upset. He is overzealous in every way, subtlety not usually at the forefront of his mind. However, his fiery spirit and will have earned him the respect of a few characters, most notably Hakumen. His first and foremost duty is to protect the citizens of Ikaruga, which was the reason why he also wants Ragna's bounty: to rebuild the glory of Ikaruga.

In Continuum Shift, he goes on a mission to find his Master's Son, although as his story revealed, his true ending in Calamity Trigger did occur and he survived the beating he got from Hakumen rather than dying (his death was a story made up by Taokaka). There is an inactive, unknown Nox Nyctores within his possession. This is earlier stated by Rachel in Calamity Trigger. This Nox Nyctores turns out to be Phoenix: Rettenjō, the Nox Nyctores with the power to sever connections with The Boundary. Platinum the Trinity informs Bang of this, but vanishes before he could gather further information about it. Although it takes place in non-canon, Ragna states in the last episode of "Teach Me, Miss Litchi! Reloaded" that it has the power to destroy other Nox Nyctores.

Platinum the Trinity also revealed to him that his true enemy wasn't Jin, but the system within NOL. After an encounter with Hazama, Bang decided to travel to Ikaruga to uncover further mysteries about its destruction and NOL's involvement in it.

Bang runs throughout Ikaruga searching for answers about his Nox Nyctores and his master, Tenjō Amanohokosaka. Along the way, however, he noticed that a lot of people had been looking for his Nox Nyctores. He eventually encountered Litchi, who asked to borrow his nail, but even Bang refused, knowing that Litchi had sided with the NOL. After exchanging blows, Litchi told him that Relius Clover may know more about his nail, but warns Bang not to confront Relius. Bang did so anyway.

Relius quickly reveals that his Nox Nyctores, the Phoenix: Rettenjō, is in fact the Kushinada's Lynchpin, a device used to activate the Kushinada Device and bring about a complete mass destruction throughout the world. He also reveals that Tenjō Amanohokosaka knew of this function, but did not use it, resulting in his defeat in the Ikaruga Civil War, although if he used it, the resulting timeline would not have been any better. Bang was shocked at this revelation.

He is last seen driving the Phoenix: Rettenjō into Kushinada's Lynchpin to shut the gate and cease the function of seithr, and to a larger extent, the Gigant: Take-Mikazuchi, controlled by Izanami. This also allowed Ragna the Bloodedge to activate his Azure Grimoire and defeat the Take-Mikazuchi.

Bang is a young adult man with spiky swift back, slightly long brown hair, and hazel eyes. He has a long, X-shaped scar across his face. He wears a dark green modified ninja outfit with a big red scarf, silver gauntlets, black fingerless gloves, dark green harama pants that expose his tights. He carries a giant nail on his back.

When he was child, he used wore his hair into messy ponytail, and no scar. He wore skintight sleeveless exposed top, dark green harama, and he was barefoot.

Bang can be quite over-exuberant, and he is prone to speeches and tangents as well as making dramatic entrances. He has a romantic fascination with Litchi, always willing to go charging in headlong if he sees someone making her upset. He is a man with great pride in his home and tolerates no ill words towards it or his master. Though many members of the cast ridicule him and think of him as annoying, he protects those he cares about (such as Carl and Tao) with his life, and has a heart of gold. He thinks of himself as the "Hero of Justice", and the one to punish all evil doers.

Bang, however, possesses a lot of standards that display quite a bit of wisdom. He is capable of eventually forgiving Jin despite his murder of Tenjō, admitting himself to be an idiot. Likewise, he is not that overly blinded with his infatuation with Litchi that even if she asked nicely, he would not hand over his nail, recognizing her allegiance with NOL. Even so, he also didn't blame Litchi for her allegiance and quickly deduced that Relius is behind it.

A trait that he shared with Litchi is his genuine love for children; he would do everything to protect them, and the sight of them being hurt badly and for no reason are one of the things that would tempt him to consider breaking his 'no-kill' policy, as shown in his rage towards Hazama in his Story Mode when he saw him beat down Carl and Tao for no reason. However, he also has a bad habit of instantly calling some of the children he saw as 'his apprentice'. Carl has begun to take that consideration well and nicely, but Platinum is highly annoyed at this treatment.

Being a ninja, Bang seems to share many similar traits in his powers and fighting style. First of all, Bang is a speedy and agile character, and demonstrates an uncanny ability to maneuver through the air as if utilizing invisible platforms. He also bears a decent command of hand-to-hand combat (Taijutsu), and can seriously harm foes with punishing grab-combos and a fiery defensive "guardpoint or autoguard" drive (Bang automatically blocks attacks while performing his Drive attacks, similar to a counter, although unlike a counter they are not dependent on being hit).

Unique to Bang is his assortment of nails, referred to as "Bang-Style Shurikens", and he has a variety of nails for different effects. Some nails will explode, some afflict a poisoned status, some unleash a spray of webs to trap the foe, and still others can rebound off of surfaces, making them more difficult to avoid. The larger, seemingly unwieldy nail on his back is used in his Astral Heat, where he jabs it into a foe, and then uses his special gauntlet to 'hammer' it in.

Finally, Bang is capable of an ability that boosts his speed to even greater heights and allows for even more of his attacks to be linked for longer, more punishing combos. Called "Bang Shishigami Forbidden Art: Fu-Rin-Ka-Zan"(which means Wind, Forest, Fire, and Mountain), it is such a decidedly incredible, and "Epic" move that the BlazBlue staff orchestrated its own background music.

In the story dialogue, it is unknown if Bang can display such powerful skills to his opponents, as he is easily disrespected. Though so far in Calamity Trigger, he managed to overpower Tager with his Fu-Rin-Ka-Zan, and in Continuum Shift he used the ability to escape from Hazama with his friends. 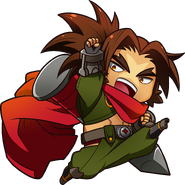 Retrieved from "https://hero.fandom.com/wiki/Bang_Shishigami?oldid=1831439"
Community content is available under CC-BY-SA unless otherwise noted.