Annoying Logan with his 'singing'

Banshee also known as Sean Cassidy is a hero from the X-Men series. An Irish mutant, Banshee possesses a "sonic scream", capable of harming enemies’ auditory systems and causing physical vibrations. He is named after the banshee, a legendary ghost from Irish mythology, said to possess a powerful cry.

A former Interpol agent and NYPD police officer, Banshee was always a decade older than most of the X-Men and had only a relatively short tenure as a full-time X-Man. He was a mentor of the 1990s-era junior team Generation X.

He was created by Roy Thomas and the late Werner Roth, and first appeared in X-Men #28 in January of 1967.

Sean got a job with Interpol while he was still a young man. After visiting a concert in Northern Ireland, Sean misses the last train home and has to hitch a ride. He is picked up by a corrupt policeman, who thought he was scouting for the IRA and intended to arrest him. He is saved by a young woman on a bike named Maeve Rourke. At one point in their journey back to Cassidy Keep Maeve's bike is damaged, and Sean flies her the rest of the way. Maeve isn't scared by his mutant powers at all. When he arrives back home, he introduces her to Black Tom. Both men are smitten by her.

Eventually Sean wins Maeve's heart. Even though he loved her too, Black Tom agrees to be Sean's best man at the wedding, since he wanted to have the best happen to Maeve. Shortly after the marriage, Sean is away on a mission for months, and while he is gone, Maeve discovers she is pregnant and gives birth to their daughter, Theresa Cassidy. Maeve dies soon after from a bomb, so Tom has to take care of Theresa. Sean returns and is devastated, and is livid at Tom for not taking care of Maeve. Sean knocks him into a chasm that breaks his leg before Tom could tell him about his daughter. Tom was furious, promising to get revenge on Sean and never tell him about his daughter.

After Maeve was killed, Sean buries himself in his work, although didn't tell anyone about his powers. On one of his earliest missions, Sean had to guard a weapons specialist named Patrick Lipton whilst he took his new weapon to Rome. On the way there, the train is attacked by the terrorist group HYDRA. Lipton and Sean get out of the train and attempt to clear the tracks so the train could move again. Before they can, Sean is shot by a HYDRA agent, causing him to accidentally let loose a sonic scream as he falls. Lipton knows that he couldn't let HYDRA know about Sean's sonic scream, so kills the HYDRA agents who had seen it and offers his services to HYDRA in return for Sean's life.

Another of Sean's missions with Interpol involved catching a serial killer. Unfortunately his superiors don't believe there really was a serial killer, and Sean has to go rogue to find and catch the killer. While Sean searches for the killer, he is aided by a mysterious man who was afraid of a genetic war. The mysterious man tells Sean that the killer would be found at Cassidy Keep. Years later, Sean would meet this mysterious man again, only this time he would be calling himself Magneto. Sean is joined at Cassidy Keep by Inspector Magrite Deveraux, who now believes him about the killer. The killer is a Russian called Arkady, who wishes to be killed so that he could stop being the Russian government's pet mutant. Sean refuses, so Arkady infects Magrite Deveraux with his death spore virus to give him motivation. Sean empties his gun on Arkady, who he believed was sent to prison. Unfortunately, he was put in a special ops program that turned him into Omega Red.

At some time, Sean was working with the New York Police Department. One evening, Sean and his partner notice Harry Leland enter a party, where they find Emma Frost also in attendance. Emma is accosted by some men, and Sean ignores his orders and runs to join the fray. Sean and his partners find the men dead. The trail leads to the sewers, where Dark Beast had taken Emma, needing her help. Sean assumes that Emma is in danger, and attacks Dark Beast. Emma telepathically stops Beast from attacking back and wipes everyone's memories of the incident. Sean manages to get evidence on Black Tom's illegal activities shortly after this, and sends him to prison. Sean still didn't know about Teresa, who was at boarding school at the time.

Sean's last Interpol mission was a rather delicate one. Sean and his partner Daniel Peyer have to infiltrate the mansion of a gangster named Almadovar and retrieve information from him. The operation had been prepared for years. Right after Sean uses his sonic powers to deactivate the security systems, Almadovar finds him. He would have shot him if the mercenary Deadpool hadn't appeared and shot Almadovar, who had a price on his head. Even though Sean is saved, the mission was now blown, since they needed Almadovar alive. After this operation, Sean quits Interpol, and goes freelance.

Banshee in the animated series 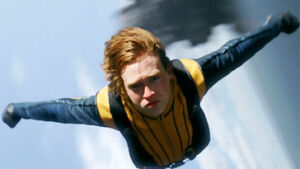 Retrieved from "https://hero.fandom.com/wiki/Banshee?oldid=2155948"
Community content is available under CC-BY-SA unless otherwise noted.