Sean Cassidy, also known as Banshee, is a supporting character from the 2011 film "X-Men: First Class", and a flashback character in X-Men: Apocalypse. He is a mutant with the ability to create powerful sonic waves with his voice, and becomes a member of Division X and the X-Men to stop the Hellfire Club.

He is portrayed by Caleb Landry Jones.

In 1962 he was recruited by Charles Xavier and Erik Lehnnsherr in order for him to join their team of mutant peacekeepers they were forming for the CIA.

After the Hellfire Club tried to recruit them, Sean and the others relocated to Xavier's mansion where they began training to defeat Shaw. Xavier taught him how to control his ability and use it to fly by using a harness developed by Hank McCoy.

During the Cuban Missile Crisis, when the team assembled to finally confront the Hellfire Club, faced Angel alongside Havok.

Banshee witnessed Erik come from the sub with Sebastian Shaw's corpse, and later saw him attempt to kill the American and Soviet soldiers with missiles. Banshee and the others attempt to help Charles when he attacks Erik, but the latter stops them by using his powers. After Erik leaves with Mystique, Azazel, Angel and Riptide, Banshee helps Charles as he has become disabled.

Some time later but prior to 1973 he was killed, likely as part of Bolivar Trask's experiments on mutants.

Years late, Sean's name appeared on a list of names Mystique scrolled through on William Stryker's computer while searching for Magneto's file. 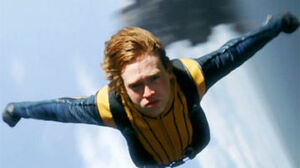 Banshee on the X-Men Movies Wiki