Make money to save the club, rid the world of injustice

Barbara "Barb Wire" Kopetski  is a bar owner and bounty hunter living in city called Steel Harbor and main protagonist of the film based on the comic book Barb Wire.

She is portrayed by actress and model Pamela Anderson.

During the Second American Civil War in 2017, Barb Wire owns a nightclub called the Hammerhead. She works in a job as both a mercenary and bounty hunter.

Later, Barb makes a deal with "Big Fatso", the ringleader of a junkyard gang: Fatso wants the lenses, which are worth a fortune on the black market, and Barb wants a million dollars and an armed escort to the airport, where she plans to get on the plane to Canada. But Fatso double-crosses Barb; when Barb, Axel and Cora show up at the junkyard to make the swap, Colonel Pryzer and his storm troopers are also there, along with Chief of Police Willis. Willis makes a show of arresting Barb and Cora, but instead of putting handcuffs on Barb, he slips her a hand grenade. Barb uses the grenade to kill Fatso and cause enough confusion to allow Barb, Axel, Cora and Willis to pile into Barb's armored van and lead the Congressionals on a car chase, culminating in a hand-to-hand fight between Barb and Colonel Pryzer on a forklift suspended by crane above the harbor. Pryzer falls to his death while Barb escapes.

In the end, the party makes it to the airport, where Barb reveals that she still has the contact lenses. She gives them to Cora, and Cora and Axel get on the plane to Canada while Willis and Barb remain on the rainswept tarmac.

Barb is an extremely beautiful woman in her mid 20s with long blonde hair and bright blue eyes. Despite having an ample bosom Barb has an athletic frame and can appear as easily as an alluring girly girl as an ass kicking tough girl. She's 170 cm tall and weighs 61 kg. Her supposed measurements were 36C-25-34.

As her favored mode of transportation is a motorcycle she often wears leather outfits. However, she is as comfortable in a small black dress and stiletto heels as in motorcycle leathers and heavy combat boots.

Barb is a formidable combatant; she's fast, agile and exceptionally strong – her physical abilities are above peak human condition. She's a master in armed and unarmed combat able fight several opponents at the same time. She's able to knock down opponents with one punch or kick.

She's proficient with standard vehicles and exceptionally skilled with motorcycles.

Barb is a successful bounty hunter able to track down and capture fugitives that other have failed to capture. Using her smarts, attractiveness and charisma she has no trouble seducing people. She is good at extracting information from people.

Barbara is a good performer and dancer, using her acrobatic skills and flexibility both on the stage and on the dance floor.

Though being smart and crafty she's only moderately successful as a businesswoman. 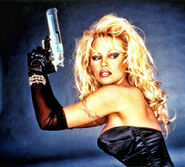 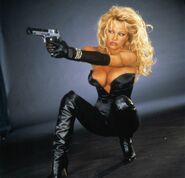 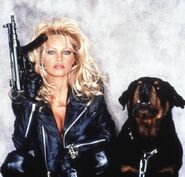 Add a photo to this gallery
Retrieved from "https://hero.fandom.com/wiki/Barb_Wire?oldid=1910425"
Community content is available under CC-BY-SA unless otherwise noted.