Deaconess of the Church of Favonius
Songstress

Catch up to her sister, Jean (ongoing)

Barbara Pegg is a supporting character of the 2020 action role-playing video game, Genshin Impact. She is a deaconess of the Church of Favonius, and a renowned songstress.

Barbara has a is a petite girl with ash blonde hair tied in pigtails, and bright blue eyes. She wears a white frock that is open at the shoulders with blue frills, gold lining, and a large white and blue bow, with a gold cross, in the front, along with white tights, white ankle boots with black bottoms and blue ankle cuffs, and a blue and white cap resembling a nurse's cap with a gold cross on its front. Her white tights have a faint flower polka-dot pattern. Her Vision is attached to a gold-adorned spell-book with a light blue cover and a small cross charm hangs at her side, attached to a black strap held together with a gold hoop.

Barbara is a charismatic individual who does her best to spread joy wherever she goes. She is a hard-worker, but can be hard on herself at times. However successful she may seem to others, she shares her own mixed feelings on her achievements. Barbara will become somewhat disillusioned and doubtful when pondering about how long a smile lasts on someone's face after listening to her song. Her craving for recognition switched over into the mere desire to help people. Even with all her depressing thoughts, she quickly jumps back on her feet, not allowing herself to be depressed for more than 30 seconds. Barbara continues to strive for excellence, believing she'll be of help to her sister.

In spite of her bubbly and optimistic nature, Barbara suffers from feelings of inferiority to Jean as she feels that her accomplishments are nowhere near as significant as her sister's and hopes to surpass her in at least one activity. While she likes to call Jean "big sister" and unconditionally loves her, Barbara usually keeps these feelings suppressed while on duty. 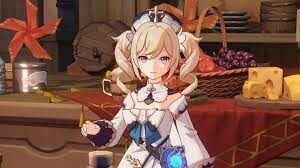