To battle the termites

Barbatus is a soldier ant and the minor supporting character in Antz.

He was voiced by Danny Glover, who also played Roger Murtaugh in the Lethal Weapon franchise, Mike Harrigan in Predator 2, Miles in Barnyard and Winston in Alpha and Omega.

When Z joins The Queen Ant's most loyal soldier ants to go a royal inspection in order to see Princess Bala, he meets Barbatus who is a soldier ant like Z's other friend Weaver.

Eventually the battle is over that resulted the destruction of termite nest, and Z comes out of hiding. The carnage made after the battle was terrible: it seems that no one else other than Z was left alive. Z wanders around to find Barbatus' head laying nearby, still alive but barely as the critically wounded soldier ant asks Z to help him up and when Z picks him up, he finds that Barbatus's body isn't there. In spite of Z telling Barbatus to hang on cause he will find his body, Barbatus knew better and demanded an honest answer, to which Z answers that Barbatus' wound was very bad. With his wound beyond saving, Barbatus tells Z to not take orders his whole life and to think for himself. Barbatus then succumbs to his wound and Z mourns the death of his dear friend.

Unbeknownst to Barbatus, Mandible had deliberately sent him and the other soldier ants most loyal to the Queen on the suicide mission in order to purge them so they would not interfere with his scheme to slay the Queen and the colony's worker ants so he could rebuild the colony made up of soldiers loyal to him. 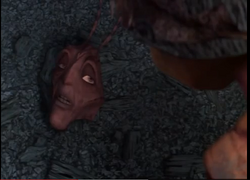 Barbatus' death
Add a photo to this gallery
Retrieved from "https://hero.fandom.com/wiki/Barbatus?oldid=1818076"
Community content is available under CC-BY-SA unless otherwise noted.