Defeat Smaug with shooting an arrow at his missing scale.
Reclaim the treasure promised to him and the people of Lake-town (both succeeded).

He was voiced by the late John Stephenson in the 1977 film adaptation. In Sir Peter Jackson's live-action films, The Hobbit Trilogy, he is played by Luke Evans, who also portrayed Aramis in the 2011 film The Three Muskeeters, Vlad the Impaler in Dracula: Untold and Owen Shaw in The Fast & Furious franchise.

Bard is the Lake-man responsible for slaying Smaug after discovering his one weak spot. He is depicted as a champion of the people against the greedy Master of Lake Town.

He rallied the guards to defend the town when the dragon attacked. Bard was able to slay the dragon Smaug with the Black Arrow after a tip from an old thrush, which had overheard Bilbo Baggins' description of Smaug's one vulnerability - a bare patch in his armor. Later on, he leads the men of Lake-town in the Battle of Five Armies.

Rankin and Bass' The Hobbit

Bard appears in the 1977 Rankin and Bass film adaptation of The Hobbit. He appears to be in charge of the city, Lake-town, as there is no Master of Lake-town present.

He later forges alliances with Thranduil to take their share of the treasure by force. Later, they forge an alliance with Thorin Oakenshield in defeating the Orcs.

Bard also appears in The Hobbit trilogy by Peter Jackson, although various changes were made.

Bard meets Thorin and Company much earlier than in the novel. In this film, he smuggles the company into Lake-town. Also, in addition to having a son, Bard is given two daughters: Sigrid and Tilda.

Upon discovering that one of the dwarves he smuggled was Thorin, the king under the mountain, Bard remembers the prophecy that foreshadows the destruction of Lake-town. He is the only one who voices his concern about the dwarf company reclaiming the mountain, as it will awaken Smaug. However, Bard is ridiculed by the other townsfolk. The morning Thorin and Company leave, Bofur, Fíli, and Óin come to Bard's house. The man initially rejects them until he learns that one of the dwarves, Kíli, is sick and allows them to take refuge at his house for Kíli to be healed.

Though he tries providing them with various medicines, Bard does not have the kingsfoil Óin needs. While attending to Kíli, they hear Smaug awaken in the mountain and decides to use the black Arrow when it comes. However, Bard separates from Bain (who came with his father) and has him hide the Black Arrow. Bard is knocked unconscious and wakes up in a cell. He warns the guards that they have no idea what is coming as the movie comes to a close.

When the Master of Laketown tries to flee the burning village on a boat, Bard throws one end of a rope at the former and tying the other end to a bar on his door. The Master's boat pulls the door off its hinges, and Bard escapes. He runs across the roofs of various buildings to face Smaug head on. He shoots arrow after arrow at Smaug, each one missing the dragon's weak spot. Noticing his father is in trouble, Bane brings him the only black arrow they had. Bard begs his son to leave for his own safety, but Smaug has them both in his sight. At the last second, Bard fires his last arrow into the bare patch in Smaug's armor, killing him. 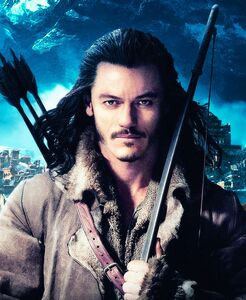 Luke Evans as Bard in Peter Jackson's The Hobbit trilogy.