Barney and the Backyard Gang

Turning from a doll to a real dinosaur / providing magic

To teach kids about imagination and friendship. Showing love with his big hugs.

Barney the Dinosaur is the titular protagonist of the franchise of the same name. He is a two hundred million years (two dinosaur years) old, six-foot tall purple Tyrannosaurus Rex with a green tummy and green spots which include three of them on his back and five more on his tail, and small yellow fingernails and toenails, who comes to life through a child's imagination. He is best known for his friendly, optimistic and wise personality and positive attitude. He gives great hugs.

Barney is a purple Tyrannosaurus rex with a green stomach, green spots on his back and tail, and yellow fingernails and toenails who comes to life through the imaginations of young children. Starting out as a plush toy, when kids use their imagination, Barney arrives with a plush custome and gives them a great big hug and helps them learn various valuable lessons about life. Barney loves getting hugs from everyone. 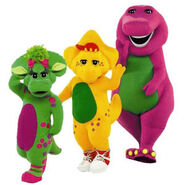 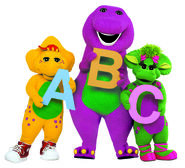 Retrieved from "https://hero.fandom.com/wiki/Barney_the_Dinosaur?oldid=2021982"
Community content is available under CC-BY-SA unless otherwise noted.