Loa of Death and Fertility

Watch over the spirits of the dead and the living.

Baron Samedi (also known as Baron Saturday, Baron Samdi, Bawon Samedi, Samedi, and/or Bawon Sanmdi) is one of the Loa of Haitian Voodoo religion. Samedi is a Loa of the dead, along with Baron's numerous other incarnations Baron Cimetière, Baron La Croix, and Baron Kriminel.

Baron Samedi is often a chaotic spirit and greatly enjoys smoking, drinking and interacting with people but he is also morbid by very nature and often when possessing others he will lay down on the ground and expects ritualists to perform ceremonies similar to those they would in funerals, despite all this he is generally happy among hosts and can even be difficult to convince to leave as he will often wish to stay for "one more drink".

In contrast when he appears as Baron Kriminel he is a sadist and his fondness for interacting with others becomes more violent, like all Loa he is neither fully good nor fully evil: out of all the Loa Baron Samedi is arguably the most well-known and reverred, especially in popular culture.

Baron Samedi is the blasphemous head of the Guédé family of Loa, or an aspect of them, or possibly their pious and spiritual father. "Samedi" means "Saturday" in French. His wife is the Loa Maman Brigitte. Although technically a deity rather than a "villain", he is often seen in negative and amoral light in media due to a great fear and/or misunderstanding of "Voodoo" by those outside the religion.

Even to those who follow Voodoo the Baron is seen as a dangerous and mysterious spirit, however, he can also be a powerful and authoritative guardian if the mood suits him - due to the sudden changes in his mood and the Western world viewing Voodoo as a "black magic", he has been labeled both a demon and a god, depending on one's view of the world.

He is usually depicted with a top hat, a black tuxedo, dark glasses, and cotton plugs in the nostrils, as if to resemble a corpse dressed and prepared for burial in the Haitian style. He has a white, frequently skull-like face (or actually has a skull for a face) and speaks in a nasal voice. He is a provocative, seductive, sexual and scary Loa, frequently represented by phallic symbols and is noted for disruption, obscenity, debauchery, and having a particular fondness for tobacco and rum. Additionally, he is the Loa of sex and resurrection, and in the latter capacity, he is often called upon for healing by those near or approaching death, as it is only Baron who can accept an individual into the realm of the dead.[[File:

Baron Samedi spends most of his time in the invisible realm of voodoo spirits. He is also notorious for his argumentative and outrageous behavior, swearing continuously and making filthy jokes to the other spirits. He is the husband of another powerful spirit known as Maman Brigitte, but often chases after mortal women. He loves smoking and drinking and is often seen with a cigar in his mouth or a glass of rum in his bony fingers. Baron Samedi can usually be found at the crossroad between the worlds of the living and the dead. When someone dies forever, he digs their grave and greets their soul after they have been buried, leading them to the underworld.

Baron Samedi is the leader of the Guédé, Loa with particular links to magic, ancestor worship, and death. These lesser spirits, all dressed like the Baron, are all as rude, crude, and obnoxious as their master. They help carry the dead to the underworld.

As well as being master of the dead, Baron Samedi is also a giver of life. He can cure any mortal of any disease or wound, if he thinks that it is worthwhile. His powers are especially great and impressive when it comes to voodoo curses and black magic. Even if somebody has been afflicted by a hex which brings them to the verge of death, they will not die if the Baron refuses to dig their grave. So long as this mighty and influential spirit keeps them out of the ground they are safe. He also ensures all corpses rot in the ground to stop any soul being brought back as a stupid, brainless, and unintelligent zombie. What he demands in return depends on his mood. Sometimes, he is content and happy with his followers wearing black, white or purple clothes or using sacred objects; he may simply ask for a small gift of cigars, rum, black coffee, grilled peanuts, or bread. But sometimes the Baron requires a voodoo ceremony to help him cross over into this world.

Baron Samedi is also married to a goddess as well as a priestess named Madame Brigitte his wife is the Loa and voodoo deity to come from Ireland and not Africa. Madame Brigitte came into existence through the combination of Irish legends and African voodoo legends. Baron's is similar to him and similar to other Loa ditties in many ways with her personality. Her appearance how is different his wife is the only white Loa in voodoo religion she has red hair and her colors are purple, green and black. Baron and his wife Brigitte never had kids of their own instead they adopted other Loa a their children just like how the Lao deities adopted Brigitte into their group.

When posing as Baron Kriminel, he is envisioned as a murderer who has been condemned to death, and is invoked to pronounce swift judgment.

When a person becomes possessed by Baron Kriminel, they shout obscenities, spit, and try to stab surrounding people. If during possession, Baron Kriminel is presented with food he does not like, he will bite chunks out of the arms of the possessed person. He sometimes calls for sacrifices of black chickens to be doused in petrol and set alight. The shrieking of the chickens when being burned alive is said to appeal to the cruel nature of Baron Kriminel and appease him.

Baron Samedi is loud, wild and rowdy. He enjoys parties and having a good time, and despite his drinking and party life style, Baron Samedi is also a man of class and style. While he is known for his foul language, he is also known to be a gentleman. He is the protector of the dead, but he doesn't mind taking a break from his job having some fun every once in a while. Baron not only protects and looks after the dead, but he guards the dead as well.

He is an alcoholic and a smoker, with this trait along with his party life style rubbing off on his wife Madame Brigitte. However, being a priestess, Baron's wife is willing to focus on her job more then having partying and having fun. Sameldi, however, always is willing to have his wife shirk work and have fun instead. However, Baron Samedi does do well at his job. He is a mischievous trickster, making deals with people and bringing back the dead for his own purposes.

Despite Brigitte picking up some of his has habits and Baron trying to get his wife to shirk her duties for fun and games, Baron Samedi is very close and protective of his wife. Although Samedi has spent time with other women since he is a god of sex, none of them compare to his wife Brigitte. Baron Samedi loves his wife because out of all the other women he has met, she has a personality that is nothing like the other goddess or like mortal women. Samedi doesn't keep secrets from his wife, as she knows of his behavior around other females, but aside from that, no other woman could take Brigitte's place. Her strict, strong will, belief in justice, feisty attitude, as well as her passion and devotion to her job is what made Samedi fall in love with her. Baron is a man who fellows his own rules and does what he wants, and while no one has control over him, the one person he listens to is his wife.

Because Baron Samedi is a man who enjoys making deals Samedi always holds up his end of a deal and doesn't like for anyone to back out or break a deal he has made. Since he is also a man who likes to have fun Samedi also like to play tricks and tries to turn a dull moment into a party. Because Samedi is usually in a good mood he is able to charm many people with his words and manner.

Despite the fact he can be rude, drinks, smokes and his use of foul words Samedi is rarely shows any regret or guilt for his choices. He is satisfied and comfortable with his life because he has everything he could ever want. Baron Samedi rarely has anything to worry about he mostly stays calm and relaxed hardly ever getting angered or nervous. 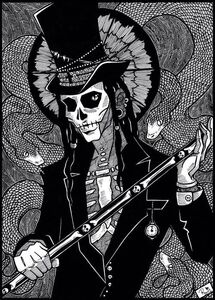 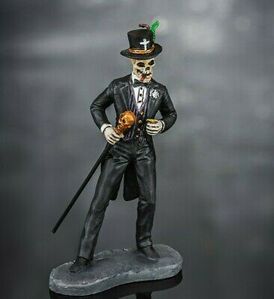 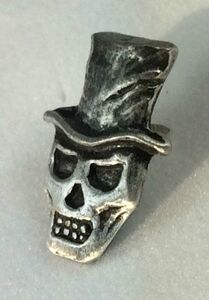 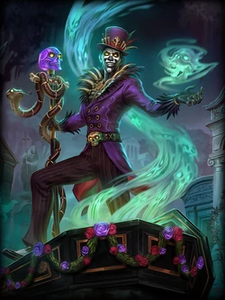 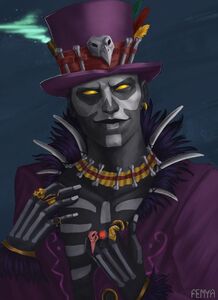 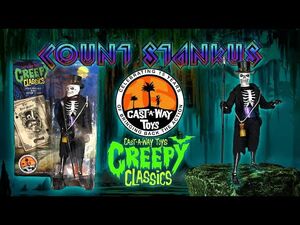 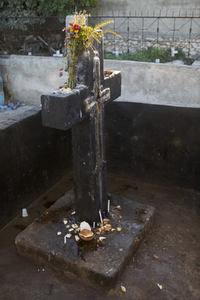 The cross of Baron Samedi at a cemetery in Port-au-Prince, Haiti.