Ana Lewis, also known as The Baroness is the supporting antagonist turned anti-heroine in the film G.I. Joe Rise of Cobra who is sister of Rex Lewis and former fiancée to Duke.

She is portrayed by Sienna Miller.

Ana DeCobray (nee Lewis), a.k.a, Baroness was a member of Cobra. Baroness was extremely intelligent and skilled in hand to hand combat, melee weapons as well as ranged fire arms. In addition to her tight leather suit, her equipment includes high-tech glasses and pulse weapons. She was once the blond haired fiancée of Duke four years prior to the events of the film. Her one condition of the engagement was that Duke watch over her brother Rex and promise nothing bad will happen to him during their upcoming tour of duty.

However, Rex was presumably killed in battle after Duke sends him into a building to and an air strike he ordered bombs the building too early. Duke, feeling too much guilt, could not face Ana and left her. Afterwards she was kidnapped by her brother and brainwashed into becoming the Baroness. Four years later she was married to The Baron Daniel DeCobray, a scientist with a lab that Cobra wishes to use. She was secretly working with Storm Shadow to steal a new piece of M.A.R.S. designed weaponry from the U.S. Army and later the Joes.

It was later revealed that the scientist referred to only as The Doctor, who was actually Rex, used her grief and a nanotechnology form of mind control he had been developing to turn Ana into the Baroness. It was never revealed whether Ana's fighting prowess and high skill with many weapons was something she already had to any extent before the transformation, although it was revealed that she was tutored in ninjutsu and other martial arts by Storm Shadow, who considered her his best student. If Ana Lewis had any athletic abilities at the time she was engaged to Duke, it was not shown.

When Duke was threatened with mind control and beaten, Ana managed to fight off the mind control she had been subjected to and began having memory flashes of the love she shared with Duke. Finally, she came to Duke's rescue before the Doctor could subject him to the procedure to turn Duke into a mindless Viper. Duke in turn managed to save her after the Doctor threatened to kill her via her implants if she tried to kill either him or the head of M.A.R.S, James "Destro" McCullen.

Together Ana and Duke manages to capture both the criminals. Ana is then seen being examined by a doctor who says it will take time but he will be able to remove the nanomites. Duke informs her that until then, she will be in the Joe Carrier Brig and that they will see each other often. However, Duke was later killed in the sequel G.I. Joe: Retaliation. Whether or not she heard of this is, and what became of her afterwards, is unknown.

Ana Lewis was originally the fiance of Duke and was on the verge of becoming his wife before her brothers presumed death. She was originally very friendly and happy, making light of the fact that Duke was leaving on a mission which could result in his death by saying "have to kill me if you told me".

However after the presumed death of her brother, Rex, and being abandoned by Duke, Ana became miserable and depressed. The Doctor, who was in fact her brother, claimed that he had taken pity on her and injected her with nanotechnology claiming that it gave her a way to deal with the pain and gave her purpose. As The Baroness, Ana was cold, merciless and had no qualms about killing. However this was only because she was being held hostage by her brother's mind control and Duke claimed that it wasn't actually the real Ana that had done these crimes. She seemed indifferent to the suffering of others with the exception of her husband (who's death at Storm Shadow's hands seemed to irritate her somewhat), and sarcastically congratulated Duke on saving Paris, seeming indifferent to the fact that the whole city would have been destroyed if Duke hadn't deactivated the nanomites.

Despite all this, Ana possessed incredible willpower and strength of character as she was the only person who had ever managed to fight off the nanotechnology she'd been injected with. Her love for Duke eventually overcame all her darker traits and she turned against her brother and James McCullen. Throughout the movie, Ana proved to be an exceptional fighter with considerable skill both in weapons combat and hand to hand combat. It was revealed that she was taught martial arts by Storm Shadow and her teacher considered her to be his best student. 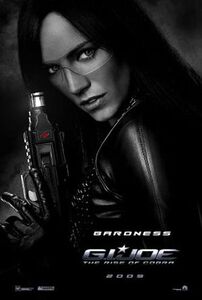 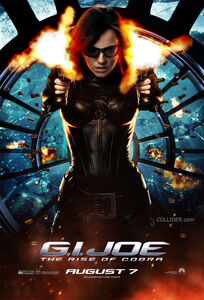 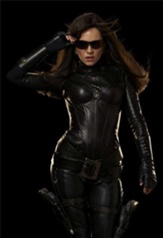 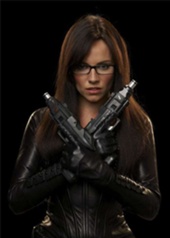 Ana Lewis before becoming the Baroness.

Ana asking Duke to watch over her brother, Rex.

A heartbroken Ana at Rex's "funeral".

Ana Lewis's dilemma; Should she let her fiancée Duke get turned into a mindless Neo-Viper or save him? 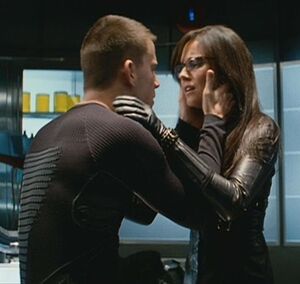