Star Wars: Attack of The Clones

Control over the Force

Show her protest against the Clone Wars (formerly)

Help the Republic win the Clone Wars.
Bomb the Jedi Temple and place all blame upon Ahsoka Tano (succeeded; failed to hide the truth)

Barriss Offee was a Mirialan Jedi Knight and General during the Clone Wars. A skilled Jedi Healer, Offee utilized her abilities at a Rimsoo on Drongar during the galactic conflict. She carried a blue lightsaber and was a practitioner of Form III: Soresu.

Offee could be easily identified by the tattoos on her face. She was one of the victims of Order 66. Barriss fought along side her Master Luminara Unduli on Ilum and later during the Second Battle of Geonosis, during which she met and became fast friends with Ahsoka Tano until later betrayed her by bombing the Jedi temple and stole Ventress's lightsabers to frame Ahsoka which failed when Anakin exposed her.

Originally Luminara's apprentice Barriss would eventually ascend to the rank of Knight some time during the Clone War. Barriss Offee was light green skinned and had an arch of purple diamonds that stretched from cheek to cheek, a sign of her Mirialan heritage. Barriss wielded a standard blue Lightsaber, and donned a black cloak with a designed hood.

Later during the Clone Wars Barriss and Luminara traveled to the icy world of Ilum for a lightsaber constructing ceremony that she constructed with a crystal Offee choose. Afterwards the pair were ambushed by chameleon droids and placed explosive mines all around the cave and the Jedi were trapped in the cave-in. They were eventually rescued by Master Yoda with Senator Padme Amidala's help. 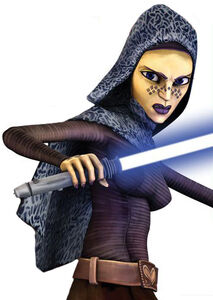 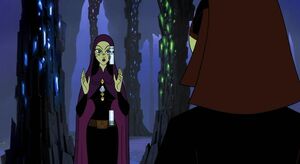 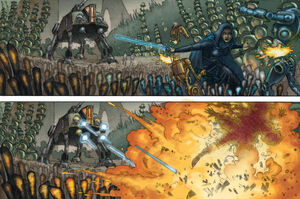 Barriss Offee's non-canon death
Add a photo to this gallery

Retrieved from "https://hero.fandom.com/wiki/Barriss_Offee?oldid=1771856"
Community content is available under CC-BY-SA unless otherwise noted.