To be the world's greatest Pokemon Trainer.

Rival
Friend of the hero

Barry (Japanese: ジュン Jun) is the rival character in Pokémon Diamond, Pearl, and Platinum. He lives in Twinleaf Town. In the anime, he is one of Ash's rivals in Sinnoh, while in the games, he is the rival of the player, Lucas or Dawn.

He is voiced by Tatsuhisa Suzuki and Tsubasa Yonaga in the Japanese version, and by Jamie McGonnigal and Erik Scott Kimerer in the English version.

Barry is the player's best friend and rival. He is known to be very impatient, and he always in a rush, and occasionally bumps into the player when they meet. He always chooses the starter with the type advantage on the player's.

Barry appears as the rival of Ash. He admires Paul, another rival of Ash from Sinnoh. It is also known that despite being from Twinleaf Town, he does not remember Dawn, unlike his game counterpart who is the best friend of Dawn when she is selected by the player. 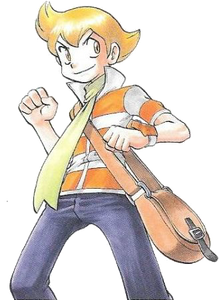 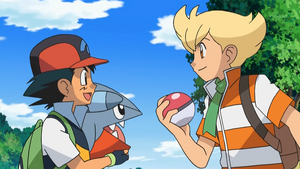 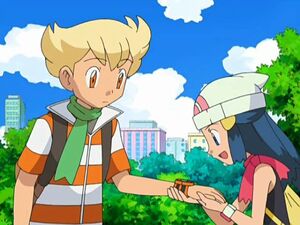