Defeat Alex Wesker and save Moira and Claire (all succeeded)

Barry Burton is a hero in Resident Evil. He was a member of the Special Tactics And Rescue Service (S.T.A.R.S.) and the backup man for the S.T.A.R.S. Alpha team. He was in charge of maintaining and supplying weapons for his fellow S.T.A.R.S members.

After a confrontation with cerberuses, Barry managed to escape into the Spencer Mansion along with fellow Alpha team members Chris Redfield, Albert Wesker and Jill Valentine. Afterward, he helped Jill overcome several of the mansion's traps and creatures. However, Albert Wesker, who was actually a spy working for the Umbrella Corporation, blackmailed Barry to do his bidding by using his family as leverage. Barry began to eliminate any evidence that implicated Wesker and began luring Jill into traps against monsters. It was because of Barry that Wesker was able to track down Enrico and murder him. While in the lab, Wesker reveals his control over Barry and has him once pull his gun on Jill. After revealing that his threat against Barry's family was a bluff, Barry knocks Wesker out with his gun. Jill, Chris, Barry, Wesker and Rebecca Chambers subsequently escaped the mansion.

After the Mansion incident, Barry immediately moved his family to Canada, out of Umbrella's reach in order to ensure their safety. He then left them to rejoin Chris and Jill in their Anti-Umbrella efforts. During the t-Virus outbreak, when Raccoon City was facing annihilation, he took a civilian helicopter in order to locate Jill and extract her from the city.

Barry came in contact with an Umbrella Biohazard Countermeasure Service mercenary Carlos Oliveira (who was assisting Jill amidst the chaos) and was able to locate Jill in time to rescue both her and Carlos before the missile destroyed Raccoon City. Afterward, Jill and Barry participated in undisclosed anti-Umbrella operations until Umbrella's shut down by the U.S. Government. After Umbrella had shut down, Barry decided to stay out of anti-bioterrorism activities as much as he could to take care of his family, which he also tried to prevent their involvement in.

At some point after this, Barry discovered that Moira had accidentally shot Polly while playing in the house, which led to them growing distant as a result.

Around late 2009, after the Kijuju Autonomous Zone Incident Chris and Barry finally had the time to catch up with each other, it was around this time that Chris requested Barry to join the BSAA. Eventually, Barry became an advisor for the organization as a combat consultant, training a young generation of soldiers alongside Chris to become the future of the BSAA. He also became friends with Chris' younger sister, Claire Redfield when they met each other is due to her friendship with his older daughter, Moira and later becomes a mentor to the Redfield siblings.

Sometime in 2011, Moira wanted to join TerraSave but Barry denied her, and told her not to get involved. Moira joined the organization anyway and got abducted.

Six months later, Barry was able to intercept an S.O.S message sent by Moira, and believing it to be a recent transmission, he was able to determine the island's coordinates. Arriving at the island, he met a young girl named Natalia Korda. Barry initially asked Natalia to stay behind on the boat, but she refused and insisted to go. He had no choice but to take her with him. Barry soon found out that Natalia has a special ability to detect an enemies presence, as well as items to aid him in his investigation. By the time they arrived at the radio tower, he heard Moira and Claire's voice on the radio which stated they are heading to the Wossek, made approximately six months ago. However, much to Barry's shock, Natalia claims that Moira was deceased while suffering from a severe headache.

Natalia shows Barry a tower where Claire and Moira went to six months ago, and as the two travel together, Barry is told by Natalia that she was present during the Terragrigia Panic; it was around that time when she lost her parents and rescued by Neil Fisher, a senior Terra Save member. Barry also discovered deceased Terra Save member Edward Thompson, and battles a mutated member named Pedro Fernandez, which Claire and Moira fought before. This brings a memory in Barry's mind when he expresses his concern to Moira regarding the dangers of working in the front line against Bioterrorism.

They make it to the now-ruined tower, where a room is filled with candles and photographs. Among the scattered objects is a painting of Albert Wesker and a blonde woman. Natalia becomes afraid by merely looking at the painting, and identifies the woman as Alex Wesker. Barry is confused and dismayed to hear her name, but before he can ask Natalia any further, a female's laughter is heard and a mysterious cloaked figure approaches them, pointing its finger towards Natalia.

The feminine creature reveals itself as Alex Wesker, living in a monstrous form. A short conversation follows shortly as Alex claims to have murdered Moira. As she summoned several Revenants to kill Natalia, Barry escorts her out by shooting at the building's frail structure, collapsing it on the Revenants.

With no more reason to search for Moira, Barry changes his objective to take Natalia out of the island safely. On their way to the sewers, they found Evgeny Rebic's corpse in his house at the sewers where both Moira and Claire encountered him six months ago. Around the premises is Moira's cellphone, with a recording made by her six months ago. Barry angrily clenches his fists knowing that Alex did hurt his daughter, and decides to protect Natalia from Alex. Barry resumes his journey across the island, unaware that Alex stalks them along the way. Alex found an opening to launch a surprise attack on him, throwing him into a gorge and captures Natalia. What happened to Alex and why she fled without taking Natalia with her remains a mystery.

Barry regains consciousness and reunites with Natalia. Willing to exact his revenge for Moira's death, Barry and Natalia head to Alex's secret laboratory, located deep within the Sushestvovanie Island mines. As they travel deeper, Alex begins to taunt Natalia, intending to discourage her. Alex went even further by ripping Natalia's doll apart and nailed it to a wall for her to see.

Confronting her in the lab, Barry discovers Alex already injecting a vial of Uroboros Virus into herself. He battles the tentacle-consumed Alex to protect Natalia until Alex collapses. However, Alex is actually playing dead, and immediately springs to life to knock him away and seize Natalia. Before he can do anything, Moira appears and uses her handgun to stun the Monster Alex, saving Natalia from being crushed. Barry's reunion with his daughter is short-lived, as Monster Alex uses her tentacles to mutate even further. She chases the three of them to a seaside cliff. At first, it seems that all is lost, until Claire Redfield arrives with a helicopter just in time.

Claire shoots Alex right on her vulnerable spot, much to Moira's amusement. However, the Monster Alex is not finished yet. Taking a stand between his daughter and the beast, Barry once again fights Alex with Claire's assistance. After dealing enough damage to Alex, Barry instructs Claire to fire a RPG-7 towards Alex's weak point, to which Claire successfully does.

As they all leave the island, with the BSAA sending more troops to Sushestvovanie Island, the Burtons express their relief after what had happened. Barry understands that he, as a father, should give Moira a little more space in the world. He then decides to adopt Natalia as his own child.

During the events of Resident Evil 6

In 2013, two years after the incident, Barry returns to be a good father to his children. At his home in Canada, he is getting prepared before Claire arrives in his home. He asks Polly where his jacket is, whilst the television he watched earlier broadcasts a news report on Global Bioterror Attack perpetrated by Neo Umbrella. 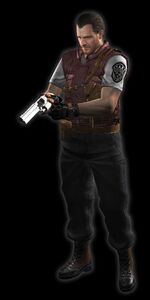 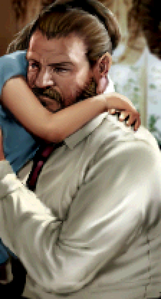 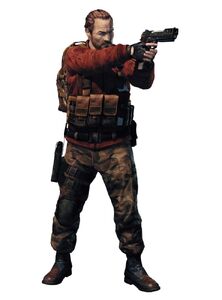 Retrieved from "https://hero.fandom.com/wiki/Barry_Burton?oldid=1909809"
Community content is available under CC-BY-SA unless otherwise noted.