Doing good deeds in the world

Save Lisa Frederick's life
Stop Dr. Moxley from activating the super accelerator
Save the world from the "time bounce"

Barry Thomas is the hero from the 1993 American science fiction film 12:01.  Barry saves the life of Lisa Fredericks, stops the maniacal schemes of evil scientist / businessman Dr. Thadius Moxley, and saves the world from an infinite event loop called the "time bounce".

He is portrayed by Jonathan Elihu Silverman.

Barry is a Caucasian male. He is six feet tall. His hair and eyes are colored black. He has no distinguishing facial hair such as a mustache or beard. He has an average physique and average strength. His age is between mid twenties to early thirties. Based on his reactions to situations, his personality can be characterized as easygoing with a great sense of humor. He wears business casual clothing - dress shirt, blazer, slacks, necktie. His underwear is white full cut woven boxer shorts.

He lives in a one-story, single family home located in a residential neighborhood. He works at UTREL Corporation providing personnel support for the technical staff.  His direct supervisor is Anne Jackson, head of personnel for UTREL.  Barry's close friend and coworker is Howard Richter, a man who loves to play practical jokes.

The movie starts with Barry waking up in an unbuttoned shirt and white boxer shorts. Barry goes to work and witnesses the murder of Lisa Fredericks, one of UTREL's head scientists for the super accelerator project (a device designed for accelerating subatomic particles faster than the speed of light). For years, Barry has had romantic feelings for Lisa but only started to court her that day. After seeing Lisa die, Howard invites Barry for a night of drinking to cope. When Barry is at home ready to go to sleep he gets electroshocked at exactly 12:01 when he tries to fix a lamp. This is the exact time the "time bounce" happens (a side-effect of UTREL's malfunctioning super accelerator) and causes Barry's consciousness to be unaffected allowing him to remember events when the day repeats.

The next day Barry wakes up and notices events repeating such as the television news, a phone call from his mother, and his supervisor chastising him. During the second run of events, Barry tries to prevent Lisa's murder. However, he fails because he is unable to convince Lisa that he is reliving the same day. After reading about the "time bounce" in the newspaper, Barry discovers the cause of his odd déjà vu. He tries to warn everyone including the UTREL's Director of Research that the time bounce is happening, but his warnings are brushed off. One person told him that if he was reliving the day, his memories would have also been wiped. Barry learns from his mistake - he will need to remember events and details to convince others that the day is repeating.

During the third run of events, Barry is much more prepared. He successfully saves Lisa's life. He convinces her that the day is repeating by predicting events before they happen and divulging personal details which she shared from the last two re-runs of the day. In addition, Barry convinces Lisa that Robert Denk (the other head scientist on the super accelerator project) is going to fire the super accelerator at midnight - causing the time bounce to happen. Lisa saves the incriminating information on a computer disk to hand it over to the police - this is why Lisa was murdered in the two other timelines. In this run of events, Barry and Lisa hide from the hit men before the day repeats.

During the fourth run of events, Barry convinces Lisa that the time bounce is happening. This time Barry takes possession of the computer disk. However, Dr. Moxley learns of the security hack and gets Barry arrested. At the end of the workday, Lisa bails Barry out of jail. Unfortunately, the hit men follow them to make sure there are no more copies of the disk. Barry and Lisa are able to escape from the hit men. When they reach the outside of Barry's home, Robert Denk is waiting for them. He tells them that he is a working with the Deparment of Justice and that Dr. Moxley is waiting for them inside Barry's home. Robert says Dr. Moxley has been sabotaging the project to be able to fire the accelerator under budget. They all go inside to confront Dr. Moxley. However, Dr. Moxley is able to trick Barry and Lisa that Robert is lying. Dr. Moxley shoots Robert, Barry, and Lisa dead.

During the fifth run of events, Barry is full of anger towards Dr. Moxley. The anger causes him to be distracted while driving and Barry dies in a car crash.

During the sixth run of events, Barry goes straight to Robert Denk to help stop Dr. Moxley. Barry manages to convince Lisa the time bounce is happening with the help of Robert. During the day, Dr. Moxley gets suspicious of Robert and Lisa. He discovers that Robert has been communicating with the Department of Justice at Washington D.C. and Lisa has been communicating with Barry. Dr. Moxley orders his hit men to kill Robert Denk.

While Moxley is away, Lisa hits the abort switch but it has been disconnected. Moxley manages to stabilize the power fluctuations. Lisa and Barry try one last desperate attempt to stop the machine by dismantling it. However, Moxley pulls Lisa away from the machine and gets into a struggle with Barry. During the struggle, Barry accidentally pushes Moxley into the path of the super accelerator as it fires. The shot kills Dr. Moxley and the time bounce is prevented from happening. 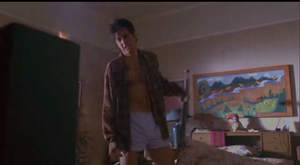 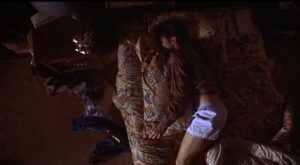 Barry as he begins each time loop iteration
Add a photo to this gallery
Retrieved from "https://hero.fandom.com/wiki/Barry_Thomas_(12:01)?oldid=1685678"
Community content is available under CC-BY-SA unless otherwise noted.