Servant of a Villain
Redeemed Villain

Bartok is a albino white bat who used to be Rasputin's sidekick until he turned good. He is the secondary antagonist-turned-anti hero and a comic-relief character in Anastasia (1997). And later he starred in his own movie Bartok the Magnificent (1999). He is ruthless, arrogant, stubborn, bitter, impatient, greedy, clumsy, cocky, cowardly, selfish, lazy, ignorant and mean. At the end of the first film of Anastasia and during the events of Bartok the Magnificent, he is calm, funny, friendly, still cowardly, hilarious, still clumsy, kind-hearted, sweet-tempered, happy-go-lucky and nice.

He is voiced by Hank Azaria, is was best known for voicing Moe Szyslak and many other characters in The Simpsons.

Bartok was the comic of Anastasia and is known to be sarcastic yet kind. Bartok was Rasputin's committed henchman, but 10 years after the execution of the Romanovs in Anastasia has left Bartok skeptical about being Rasputin's henchman and is constantly trying to convince Rasputin to "get a life" and to stop being stressed.

Bartok is kind yet a little skeptical in Bartok the Magnificent and sometimes needs guidance from Zozi, but he usually follows his heart.

Bartok was Rasputin's committed henchman and the former secondary antagonist of Anastasia. He quickly called to Rasputin that Anastasia had escaped in the beginning of Anastasia. 10 years later, he finds the reliquary (which reunites him with his master) and is skeptical about being evil and tries to guide Rasputin away from killing Anastasia. He ended the movie by pulling down the screen after being kissed by a female bat

Bartok was the main protagonist in Bartok the Magnificent. He performed magic acts all over Russia and has arrived in Moscow, impressing passersby and the Tsarevich Ivan Romanov. A bear attacks right after Bartok's show, and Bartok traps him in the wagon. Everyone is impressed with Bartok and Bartok is rewarded with gold coins, and a royal ring from Prince Ivan, much to Ludmilla's dismay.

Later, Bartok counts the money he receives and the bear wakes up and frightens him. The bear is actually named Zozi and is Bartok's business partner. Zozi agrees with Ludmilla, Prince Ivan's advisor, that the ring should be given back. Bartok refuses.

In Moscow, Ivan is supposedly kidnapped by Baba Yaga, an evil witch who is terrorizing all of Russia. Ludmilla finds an iron tooth and tells the people of what has happened. The citizens think it was Baba Yaga and Ludmilla asks who is brave enough to save Ivan. Two children nominate Bartok, who is on the way to St. Petersburg with Zozi.

Cossacks come after Bartok and Zozi and they become worried because they think Ludmilla wants Prince Ivan's ring back. Bartok denies that he is Bartok but he is brought to the people, who plea him to help rescue Prince Ivan from Baba Yaga in the Iron Forest. Bartok reluctantly agrees, and they head to the Iron Forest.

They head over to the Iron Forest and discover that they must answer a riddle given by a huge skull. Zozi answers effortlessly and allows only Bartok to enter. Baba Yaga says in order for Bartok to discover where Prince Ivan is, he must collect three objects and return them to Baba Yaga without Zozi's help or they'll both die.

Bartok successfully finds the two objects but there is still one more object to be found. Baba Yaga reveals that it is from Bartok himself. Bartok offers everything he has but Baba Yaga refuses them and laughs. Bartok gets frustrated and upsets Baba Yaga. Bartok apologizes and begins to cry, and Baba Yaga collects his tears. She makes a magic potion and reveals that Prince Ivan never left Moscow and is trapped in the tower, showing that she did not kidnap Ivan. When Bartok drinks the magic potion, what he is in his heart will show ten times on the outside.

Bartok and Zozi return to Moscow and lead Ludmilla and Vol up to the tower. It is revealed that Ludmilla ordered Vol to pretend to be Baba Yaga and "get him out of the way", meaning to kill Ivan while Vol thought that she wanted him locked up. Ludmilla locks Bartok and Vol up and steals Bartok's magic potion when he was just about to drink it. Ludmilla leaves them trapped, with water filling up the tower.

Ludmilla believes that her beauty will become ten times as she drinks the potion, singing "The Real Ludmilla Comes Out". The magic potion actually turns her into a huge dragon. Ludmilla, as a dragon, then rampages around Moscow, setting houses on fire.

Meanwhile, Zozi saves Bartok, Vol, and Prince Ivan. Bartok then fights Ludmilla and tricks her into climbing the tower, which becomes unstable and falls, killing Ludmilla and flooding the town, which puts out the flames. Zozi then reveals that Bartok is a real hero because he not only successfully fought Ludmilla, he also showed Baba Yaga compassion.

Bartok then returns Ivan's ring. Baba Yaga appears just then, writing, "Bartok, the Magnificent" in the sky. Bartok and Pillof, who was one of Bartok's quests to give to Baba Yaga, hug Baba Yaga farewell and Baba Yaga and Pillof leave. 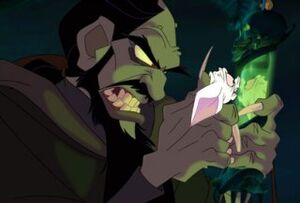 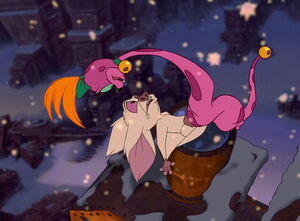 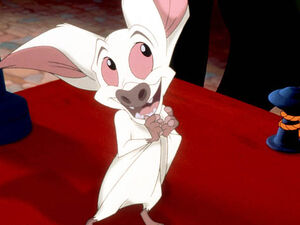