Basara is an anti-hero in the Samurai Shodown video game series.

Basara is a type of yūrei "reborn" due to an extreme hatred he harbored before his death.

In his previous life, Basara lived in peace with his lover, Kagaribi, until the monstrous demonic swordsman Zankuro came through and slaughtered everyone. He blames "the demon" for Kagaribi's demise but, in Samurai Shodown V, it is revealed that Basara himself killed her.

However, he remembers how he died and thus aimlessly seeks to take revenge on Zankuro. Basara discovers that his "rebirth" is caused by Amakusa, so he heads for Shimabara to kill him. In his ending, Amakusa used Kagaribi's vision to draw him into a pillar. It is expected that he will not be released at any time in the future.

Basara was a man happy with his life of peace. All that remained from his previous life, however, was his love for Kagaribi and his hatred for Zankuro. Aside from these attributes, he is a left-handed mindless killer who doesn't discriminate among the victims he murders. 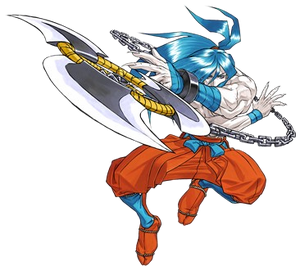 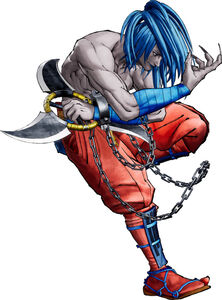 Retrieved from "https://hero.fandom.com/wiki/Basara?oldid=1956859"
Community content is available under CC-BY-SA unless otherwise noted.