Bashful is one of the seven dwarfs in Snow White and the Seven Dwarfs. He was voiced by Scotty Mattraw in the original film and is currently voiced by Jeff Bennett.

True to his name, Bashful is very shy and coy. He is said to have a crush on Snow White, and it's quite apparent throughout the course of the film, particularly seen whenever the two interact directly. His shyness often prompts him to blush madly, covering his red face beneath his long white beard in between giggles and shy chuckles. His overall personality, like for most of the dwarfs, apparently infuriates Grumpy. This can be seen during the "The Silly Song", where Bashful's apprehension to perform before Snow White holds up the evening's musical number, causing Grumpy to physically harrumph.

Aside from his coyness, Bashful also appears to be romantic. He adores the idea of true love, and when Snow White decides to share a story with the dwarfs, Bashful joyfully suggests a love story, which she obliges to. 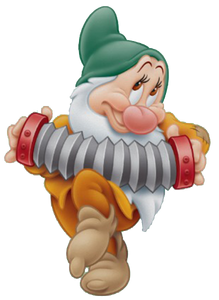 Retrieved from "https://hero.fandom.com/wiki/Bashful?oldid=2001589"
Community content is available under CC-BY-SA unless otherwise noted.