Animal
Basil Brush is a fox glove puppet who serves as the main protagonist of the 1968-1980 series The Basil Brush Show and it's 2002-2007 follow-up of the same name. He is known for his catchphrase Ha Ha Boom Boom!.

Basil was accompanied by a human co star and would perform a duet with a guest star.

The show would end with a story about one of Basil's relatives.

In this series, which had a sitcom format, Basil lives in a flat with a man named Stephen (whom Basil refers to as Mr. Stephen. The other occupants of the flat are Stephen's niece Molly (known as Miss Molly by Basil) and nephew Dave (known as Master Dave by Basil), whom Stephen is caring for whilst their parents are away travelling the world.

The series involves the adventures Basil and his friends and also features other characters such their American neighbour Madison and Anil, whose cafe Basil and the others frequently go to.

In the fifth series, Stephen leaves the flat to work elsewhere and his cousin Liam moves in and becomes Basil's new sidekick. 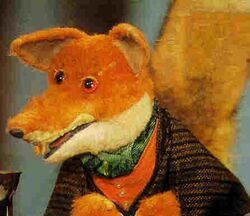 Retrieved from "https://hero.fandom.com/wiki/Basil_Brush?oldid=1840437"
Community content is available under CC-BY-SA unless otherwise noted.