Arrest Ratigan (succeeded in a way)

He was a detective based on the fictional sleuth Sherlock Holmes and His main goal is to stop Professor Ratigan from overthrowing the Queen of England and rescue Olivia Flaversham's father Hiram. There are a few differences between Basil in the book series and in the film version, such as mercurial moods in the latter. He also plays the violin rather well in the movie, whereas the book series stated Basil's violin playing was atrocious-instead, Basil played the flute.

Basil is voiced by the late Barrie Ingham.

In the film, when Dr. David Q. Dawson meets a lost and terrified Olivia Flaversham, desperately searching for Basil to help her locate her kidnapped father, he helps her find Baker Street. Before long, all three are involved in a maze of mystery and intrigue, looking for clues and realizing that all clues point to one person—Basil's archenemy, the nefarious Professor Ratigan. Whenever Olivia is kidnapped as well, Basil is able to track down Ratigan's hideout using skillful observation and deduction.

Basil's keen and penetrating mind save the day when, after a near coup of the English royalty, becomes involved in a fierce battle with Ratigan at the top of the tower of Big Ben, where Ratigan attacks him. He pursues Basil with great speed and leaps into him, and they both fall onto the clock's hour hand. Ratigan extends his claws and begins slashing at Basil, causing some serious injuries to him such as smacking him in the throat, a gash across his muzzle, scratched deeply by Ratigan's claws across the flesh of his back, and a bleeding arm. Because of these injuries and Ratigan's size, Basil is unable to fight back and Ratigan manages to knock him off the hand. And yet, Basil grabs onto the wreckage of the blimp saving his life, furiously calling out to Ratigan who believe he has won that their game is not yet finish and rings Ratigan's bell having pickpocket him during their confrontation. Suddenly, the clock bell tolls, causing Ratigan to plunge off off the hand; as he falls he tries to take Basil with him but fails and falls 278 feet into the clouds below. The fall murders Ratigan. Basil recovers from his injuries and Dawson becomes his new assistant. 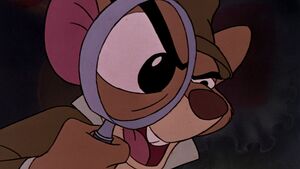 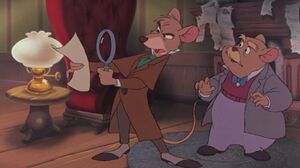 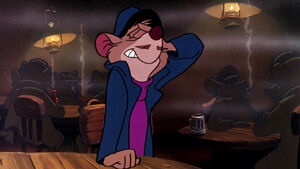 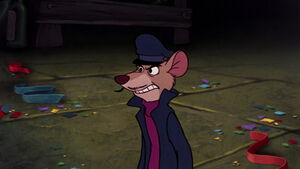 "Ratigan, nobody can have a higher opinion of you than I have...and I think you're a slimy, contemptible sewer rat! 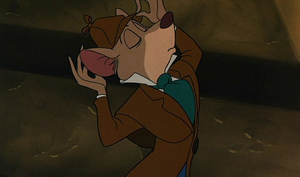 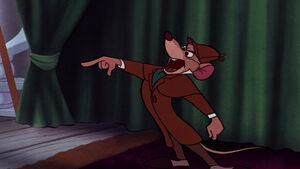 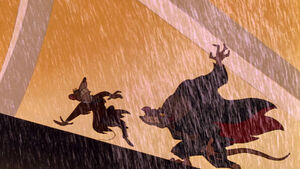 Basil being attacked by the insane Ratigan 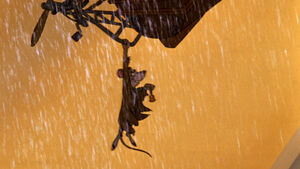 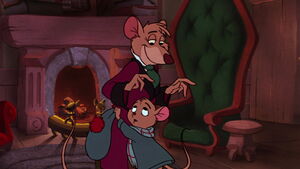 Olivia thanks Basil for all his help

Basil on the Disney Wiki.