Be with Revan (succeeded)

Bastila Shan is one of the protagonists of Star Wars: Knights of the Old Republic. She is one of the Jedi who is on the hunt for the villainous Sith Lord named Revan, who would later become her love interest and the savior of the Republic.

She was voiced by Jennifer Hale.

Knights of the Old Republic

Bastila is first mentioned as being the Jedi in charge of the Republic ship the Endar Spire. Following it's destruction Bastila is among the occupants who escape to the planet Taris, only for her to be captured by the Black Vulkar gang. Fortunately, she is rescued by an amnesiac Revan, but is initially cold and hostile towards him. At the same time though Bastila does acknowledge his capabilities and also notes that he possess a connection to the Force. Indeed, after Revan is re-trained as a Jedi, he and Bastila are partnered together during the hunt for the Star Maps.

As time passes, Revan is able to peel away Bastila's layers and frosty exterior, also learning that her relationship with her mother was poor and that the father she adored died. After helping her resolve her issues with her mother, he begins to form a romantic relationship with Bastila, but she is reluctant to return his feelings due to the Jedi Code's frowning on attachments.

During the escape from the Leviathan and a run-in with Darth Malak, Revan learns of his past as a Sith Lord and how Bastila was involved with the Jedi's re-writing his memory and giving him a new identity, much to Bastila's guilt. She is then captured by Darth Malak while buying Revan and Carth time to escape the Leviathan with the other members of the Ebon Hawk. She is then tortured by Malak and from that corrupted to the Dark Side. However, Revan is able to redeem her on the Star Forge, the two also at last confessing their love for one another in full, neither one afraid of their feelings by this point.

Bastila would later go on to marry Revan and father his son, who ironically did not become a Jedi in spite of his lineage. Bastila however assured her son that he was precisely what the Galaxy needed after so many long years of war and that his father would have been proud of him. 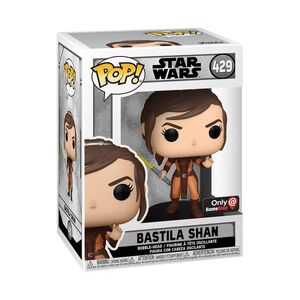 Retrieved from "https://hero.fandom.com/wiki/Bastila_Shan?oldid=2298948"
Community content is available under CC-BY-SA unless otherwise noted.