Heroes Wiki
Register
Don't have an account?
Sign In
Advertisement
in: Articles under construction, Arkhamverse Heroes, Organizations,
and 16 more

The Bat Family was Batman's team that included his main allies. This group is ready to support him in every possible occasion.

Alfred appeared at a stressful point in his and Bruce's relationship. Oracle also appears in Origins, but as a young Barbara Gordon who sent Batman on a mission to get rid of Penguin's weapons crates. Barbara was clearly upset with her father and the justice system in Gotham City. Barbara hinted at Batman that a partnership could be formed. Although Dick Grayson himself did not appear in the story, a poster that showed the Flying Graysons could be found at the GCPD.

Between Arkham Origins and Arkham Asylum

Within those several years, Dick Grayson, who recently became an orphan due to the Flying Graysons' murder, was adopted by Bruce Wayne. After Bruce gained enough respect and trust for Dick, he eventually revealed his identity as Batman to Dick, and then trained him to develop a new sidekick, Robin: The Boy Wonder. Together, the Dynamic Duo took down both criminals and super villains. After years of fighting crime as Robin, Dick started to grow weary of living in Batman's shadow, and also became determined to prove himself, so he passed on the mantle to Jason Todd and he himself took on the identity of Nightwing to fight crime both independently in Blüdhaven and along side the rest of the Bat Family in Gotham. During that time, Barbara also took on the identity of Batgirl. Meanwhile, Jason Todd, who was released from prison due to a new Wayne Industries project for troubled teens, allowed Jason to be released early. Jason was an A student, an excellent athlete, and he attracted the personal interest of Bruce Wayne. A few months after being released, Batman appeared in Jason's dorm, handed him his own Grapnel Gun and a Robin costume, and told him that he had one night to impress him. He did.

Immediately after that night, Jason assumed to the role of Batman's sidekick, Robin. After several months of aiding Batman as Robin, Bruce eventually adopted Jason, and took him in as his ward, and thus Wayne Manor became Jason's new home. During this time, much like Dick Grayson did before him, Bruce revealed his identity as Batman to Jason, and had another entrance to the Batcave built into Jason's bedroom. There, Batman trained Jason in martial arts, acrobatics, and the art of stealth. Batman also tutored Jason, and gave him both physical and mental training. Together, the new dynamic duo defeated multiple super villains and criminals. However, despite this, Batman had acknowledged that Jason possessed violent tendencies in his actions as Robin, with numerous incidents of him going too far even under Batman's natural guidance. Therefore, Batman feared that Jason might one day kill instead of restrain, however, Jason remained loyal enough not to break Batman's moral code not kill. One day, The Joker blew up a school filled with children, with no survivors in the process. Frustrated at his mentor's unwillingness to kill Joker in spite of his heinous crimes, Jason set out to do it himself. After turning off his comm link and tracer, Jason tracked Joker to Arkham Asylum. When Jason entered the wing, intent to kill the Joker once and for all, this played directly into the villain's hand, and Jason was ambushed by multiple Joker's Henchmen, while Jason put up a fight and defeated most of them, Jason was soon overwhelmed by these odds, and was soon beat relentlessly with a crowbar, which knocked out several teeth and broke his ankle in the process, and abducted and entrapped the teenager within the wing in order to torture him over the course of a year. The forgotten halls of the asylum served as the perfect grounds to torture and humiliate Jason as, even when locked up, Joker had access to the wing thanks to several guards on his payroll, and Batman never suspected that Jason was just below the surface of the fully functional institution. Jason was forced to endure six months of continuous and brutal torture by Joker. But despite this, Jason was strong and held on to the belief that Batman is out there looking for him. However, Joker managed to break Jason down mentally when he showed him a picture of the new Robin, Tim Drake. As a result, Jason lost hope after that and started to hate his former mentor for abandoning him. But in reality, Batman searched frantically for his adoptive son and sidekick, as he traveled through all of Gotham every night just to find him. Finally broken, and Joker finally succeeding in his psychological plan to turn Batman's sidekick against him, Joker forced Jason into revealing Batman's identity, but before he did, Joker shot him, and gave the footage of that to Batman. Batman fell into a deep depression over Jason's "death", so much to the point that he left his costume along with a photo of him and Jason on display in the Batcave.

In actual fact, his death was faked and Joker continued to torture Jason for just over a year in an abandoned wing at Arkham Asylum before Jason escaped. However, Jason did not rejoin the Bat Family and was still presumed dead. Bruce stopped looking for Jason after he received his death on tape and allowed Tim Drake to fight crime along side him as Robin. However, due to him still grieving for Jason, Batman would occasionally call Tim, Jason. In retaliation to Commissioner Gordon's efforts, Joker crippled Barbara, and confined her to a wheel chair. Barbara was forced to give up fighting crime in the field and took on the mantle of Oracle. Catwoman also became a notorious thief in Gotham, and her love/hate relationship with Batman bloomed, which also became a problem when faced between making decisions conflicting between Batman's intentions and the intentions of herself and her fellow criminals, notably her close friends, Poison Ivy and Harley Quinn.

Oracle communicated with Batman via three-way radio communications during the night.

Between Arkham Asylum and Arkham City

Batman's allies included Alfred and Oracle by communication only, while Robin helped Batman fight off three of Ra's al Ghul's assassins. Batman later communicated with Robin via radio communication after he defeated Ra's. Catwoman also appeared and aided Batman in gaining information as well as saving his life during Protocol 10. While never appearing or mentioned in game, Nightwing was confirmed to have remained at Wayne Manor, and protected it, Alfred, and the Batcave from TYGER and Henchmen during the incident. Although not mentioned in game, Batman was captured by Ivy and Harley in order to test their friendship with Catwoman, and in general, revenge in regards to her actions which officially ended their close friendship, and allowed Catwoman to keep herself aligned with the Bat Family (when it favored her).

Between Arkham City and Arkham Knight

Robin rescued Batman after he was captured by a mourning Harley Quinn. Alfred also aided Batman in identifying the Bookbinder as well as fending off an attack from a reformed Suicide Squad lead by Penguin while being spied on by the Arkham Knight, who was secretly killing criminals that Batman captured.

Alfred, Oracle, Robin, Nightwing, and Catwoman all aided Batman in his missions in Gotham City during Arkham Knight. Jason Todd returned as the Arkham Knight and initially opposed Batman, but after he was beaten and called Robin numerous times by Batman during the fight, he gave in. It was revealed that the tape of his death was faked and the Joker took the opportunity to break Jason into hating Batman. It was also revealed, that the period of time that Joker tortured Jason (originally believed to be just over 6 months) had in fact been over a year before he was able to escape. Jason forgave Batman for not being able to save him and came to his aid after Batman gave himself up to Scarecrow to save Robin and Commissioner Gordon. During that encounter, a Red Bat symbol was painted on the chest of Jason's Suit, which signified his re-union with the Bat Family and his forgiveness towards Batman. However, it was a grim reminder of his murderous crime fighting tactics. 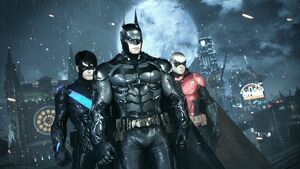 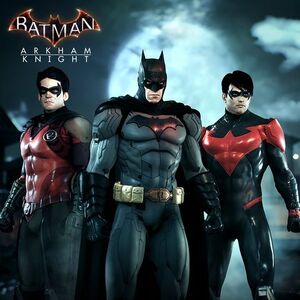 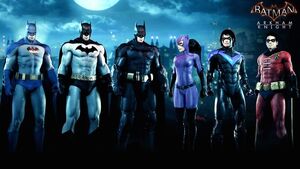 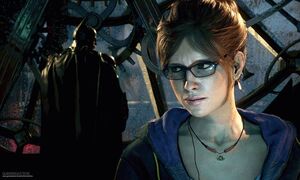 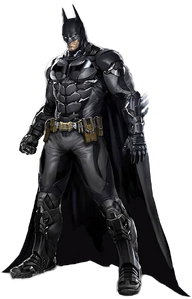 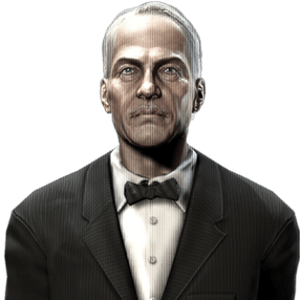 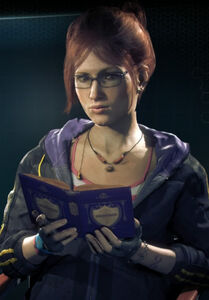 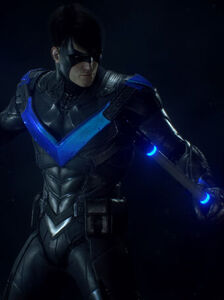 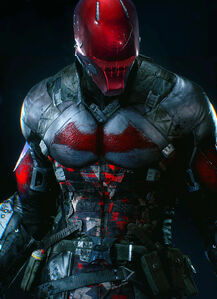 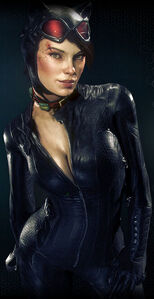 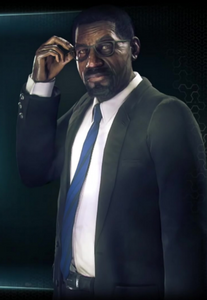 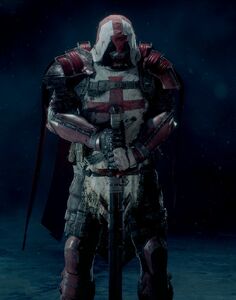