Sympathetic Heroine
Barbara Joan Gordon, often known as Batgirl is a major character of the DC Universe animated series, Harley Quinn. She is the daughter of Commissioner Jim Gordon and a student at Gotham University.

She is voiced by Kaley Cuoco's sister Briana Cuoco.

She is introduced in the season 2 episode "Riddle U", she is seen as a student and tour guide living in Riddler University. After seeing her father hit rock bottom with Batman misssing and helping Harley Quinn defeat Riddler, she becomes inspired to assume the identity of Batgirl. In the episode "Batman's Back Man", she proved to be effective in fighting crime and is appointed by Batman as his temporary replacement. In the episode "There's No Place to Go But Down", Barbara reveals her identity as Batgirl to her father and helps him take down Two-Face. In the following episode, "Inner (Para) Demons", after Gordon becomes Commissioner again and is told by the President of the United States that he needs to kill Harley in order for Gotham to rejoin the U.S., Barbara unsuccessfully tries to dissuade him, and later warns Harley that Gordon will be coming after her. 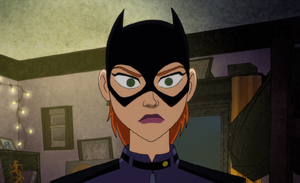 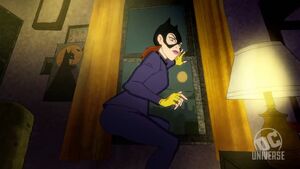 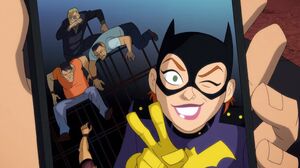