To help Batman protect the people of Gotham City and humanity

Comic Relief Sidekick
Batgirl a.k.a. Barbara Gordon is one of the deuteragonists of The Batman. Barabara has shoulder-length red hair and brown eyes. Her Batgirl costume is a purple bodysuit with a black cape, cowl, gloves, and boots with purple highlights and she also sports a gold bat-symbol and a gold utility belt. Unlike the comics and other media, this version of Batgirl appears as Batman's first sidekick instead of Robin (who is not introduced until Season 4). She is also the new female protagonist of The Batman, replacing Ellen Yin for the remainder of the series.

She was voiced by Danielle Judovits.

She was first mentioned in the episode Night and the City and made her first appearance on the episode Batgirl Begins - Part One. On the show, Barbara Gordon was the teenage daughter of Gotham Police Commissioner James Gordan and a student of Gotham High. Though an excellent gymnast, she has lost interest in gymnastics; however, her father wants her to continue in the hope she might attend an Olympic Games. Although not as interested in gymnastics, she found police detective work fascinating - which worried her father. In addition to that, Barbara associates with her close friend Pamela Isley, a fellow student with a juvenile-detention record - something James does not like. During a battle with Temblor in the Chlorogenic lab, Barbara sees Batman in action; after this, the seed to become Batgirl (or “Batwoman” as she demands to be called until Commissioner Gordon calls her by the Batgirl name) is planted. The battle also causes Pamela to become the villainess Poison Ivy after an experimental plant mutagen fell upon her. Batgirl arrives at Poison Ivy's lair to help Batman save Gordon (though she originally wanted to save her friend from getting into more trouble) only to find Batman under Poison Ivy's mind control. Batgirl is then forced to fight Batman. During the battle, she beat Batman in hand-to-hand combat by kicking him into a pond which freed him of Poison Ivy's control. After she defeated Poison Ivy and saved her father, Batman decides not to tell Gordon that his daughter is Batgirl. That first adventure, Batgirl says is "only the beginning".

She aids the Dark Knight with numerous cases, proving herself as a trusted ally. Batman himself, despite never asking to have a partner, becomes fond of her working with him - though he would not admit it. At one point, in the episode A Dark Knight to Remember, she has figured out that Batman is secretly Bruce Wayne as the billionaire is physically fit and can afford to purchase equipment that Batman would require. However, Wayne suffered partial amnesia during that time which made him lose the memory of his existence as the Dark Knight Detective which threw Barbara off. After she and Batman saved Gotham from Maxie Zeus's siege in the episode Thunder, the Dark Knight gave her his spare gadgets and accepted her as his partner, marking the only time Batgirl is Batman's first sidekick as opposed to Robin, which differs from the comics.

Batman finally let Barbara in on his secret in the episode Team Penguin after getting second partner Robin (Dick Grayson). Deciding they needed teamwork training and to learn to trust one another more, the trio shares their secret identities (but Batgirl is reluctant to give up hers so Batman does it for her) and begins training. She and Robin develop a sibling-like relationship throughout the show and gets annoyed when Robin calls her "Babs", but she does have feelings for Robin. In the two-parter episode The Joining, she participated in the battle to save Earth with Robin from the alien technological entity known as The Joining. 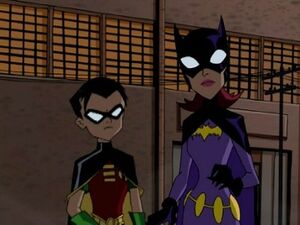