Defeat and stop Mr. Freeze and Poison Ivy from destroying Gotham City and together with Robin and Batgirl (succeeded)

Batman was the alias of Bruce Wayne, the sworn protector of Gotham City. This version appeared in the critically panned 1997 film, Batman & Robin.

He was portrayed by George Clooney, who also portrayed Danny Ocean in Steven Soderbergh's Ocean's Trilogy.

Bruce witnessed his parents' murder as a young boy, which inspired him to stand against crime and become Batman.

While attending a charity ball to help save the Rainforest, Batman and his crime-fighting partner Robin both got affected by Poison Ivy's mind control dust, which caused them to fight over her throughout the film. While Batman and Robin got into a bidding war over Poison Ivy, the ball was crashed by Mr. Freeze, and Batman was able to regain focus to fight. After a car chase where he and Robin captured Freeze, Batman and Robin continued to argue with each other. Batman criticized Robin for his recklessness which nearly got him killed and only being able to think of Poison Ivy, and Robin fired back that Batman doesn't trust him and wants all the glory for himself, including Ivy. Batman stated that Robin must do as he says or there will be no team, and Robin stormed off in anger.

Batman and Robin eventually learned that Poison Ivy helped Freeze escape from Arkham Asylum and tracked them to Freeze's old hideout. While searching the hideout, they were confronted by Poison Ivy and her enforcer Bane. During the confrontation, Poison Ivy affected the Dynamic Duo with her love-dust again and attempted to seduce them. During her seductions, Ivy pinned Batman to the floor and flirted with him before leaning in to kiss him, but Batman managed to resist her seductions and pushed her off him, grabbing her arm. Unfortunately, he was ambushed by Bane, which allowed Ivy to escape and confront Robin. Batman soon realized what was happening, and after defeating Bane stopped Ivy and Robin from kiss, realizing that the reason she kept trying to kiss them was to poison them. However, Robin remained influenced by Ivy, and blinded by his new love for her, thought Batman was jealous that she preferred his "sidekick" over him and attacked him to defend Ivy from him. Batman easily defeated Robin, but Ivy escaped while they were distracted and Robin renounced Batman as his partner.

Eventually, Poison Ivy stole the Bat Signal and changed it to a Robin Signal, signaling Robin to her lair. Batman realized this was a trap to divide them, but Robin believed it to be a sign of true love and Batman was still trying to keep them apart. Finally, Batman begged Robin to simply trust him as a partner, but as family. Batman was able to gain Robin's trust again, and Robin took precautions before going to Ivy's lair. Batman followed Robin in the shadows, with Ivy having no idea he was watching. He observed Robin and Ivy flirt from a distance without interrupting this time, trusting Robin to get the job done. Robin convinced Ivy to tell him what she and Freeze planned together as a sign of trust, and shared a passionate kiss with Ivy "for luck." After the kiss, Robin revealed that he had tricked Ivy, heading Batman's warning about her he wore rubber lips for protection against her poison. Ivy angrily shoved Robin into her lily pond in an attempt to drown him and tried to escape, only for Batman to finally make his presence known and ambush her on her way out.

Batman appeared to have her cornered, but Ivy ordered to plants in her lair to attack Batman, tangling him up and pulling him to to the ceiling, Batman was restrained and slowly began to be crushed. Ivy laughed at Batman and began to leave once again, but was interrupted by Barbara Wilson, Alfred's niece and Batman and Robin's new partner, Batgirl. While the two of them fought, Batman recorded Ivy's confession of trying to murder Freeze's wife, and managed to cut himself free of her vines. Batgirl managed to defeat and apprehend Poison Ivy, and the Trio left her trapped in her own lair where she was eventually apprehended by the police and imprisoned in Arkham Asylum.

Batman was tasked with apprehending Mr. Freeze. Throughout the film, Bruce thinks about his relationship with his butler and friend, Alfred Pennyworth. Batman stopped Mr. Freeze, with help from Robin and Batgirl, from freezing Gotham City with the new telescope at Gotham Observatory, and revealed to Freeze that Poison Ivy had betrayed him and tried to kill his wife in order to be the only woman in Freeze's life. Batman promised to have Freeze's wife moved to the lab at Arkham Asylum, where he would be able to continue his research and find a cure for her disease.

Freeze also provided Batman with an antidote to save a dying Alfred, who was suffering from a lesser case of the same disease, before being incarcerated in Arkham Asylum. Back at Wayne Manor, Bruce gave Alfred the antidote, saving his life. After initial hesitation, he allowed Barbara to continue being Batgirl and join the crime-fighting team.

George Clooney also wore an anatomically correct Batsuit, including abs and nipples, in a gladiator fashion, blending man and beast. Joel Schumacher cast Clooney in the role because he felt the actor could provide a lighter interpretation of the character than Michael Keaton (in Batman and Batman Returns) and Val Kilmer (in Batman Forever). Schumacher first got the idea of Clooney as Batman when he doodled the Batman cowl over the image of Clooney's face in a magazine while Val Kilmer was unavailable to reprise his role. 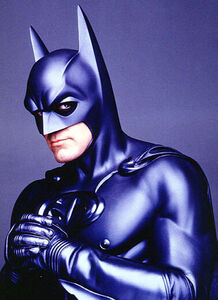 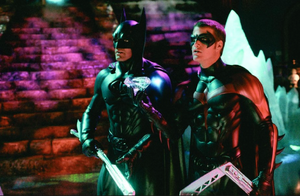 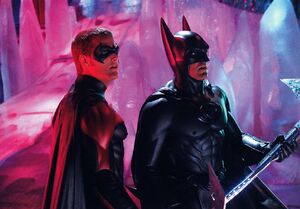 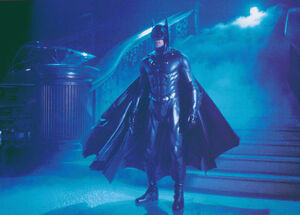 Batman at the Museum 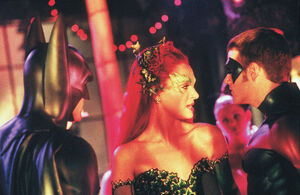 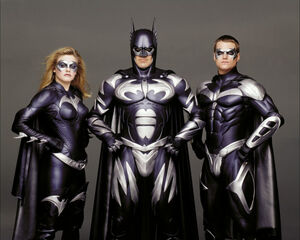 Retrieved from "https://hero.fandom.com/wiki/Batman_(Batman_%26_Robin)?oldid=2176715"
Community content is available under CC-BY-SA unless otherwise noted.