Batman's fourth costume, an amalgam of his second costume and third costume with long ears on the cowl, worn during his time with the Justice League 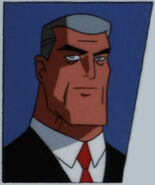 Bruce Wayne prior to his retirement as Batman

Bruce Wayne's fifth and final Batsuit during his career as Batman

Bruce Wayne retiring as Batman for good in 2019

The original Batman comes back

Bruce Wayne and Diana having a dance.

Batman and Sarge Steel discussing what Floronic Man and Poison Ivy are up to.

Batman, Harley and Nightwing are ready to fight Floronic Man and Poison Ivy.

Batman angrily scolds Harley as he is still reluctant to trust her.

Batman in Justice League vs. The Fatal Five

Batman protecting Miss Martian
Add a photo to this gallery
Retrieved from "https://hero.fandom.com/wiki/Batman_(DC_Animated_Universe)/Gallery?oldid=1684463"
Community content is available under CC-BY-SA unless otherwise noted.