He is voiced by Kevin Conroy, who also portrayed the character in the animated series and films, in the Teen Titans Go! series, and the Arkham series. Conroy also voiced Alien X in Ben 10: Alien Force.

Bruce Wayne was born in Gotham City, the son of Dr. Thomas and Martha Wayne, and the latest descendant in the city's generationally prominent and wealthy Wayne family. One night, after watching an exciting adventure film, the Wayne family left the theater through a lane and met a street mugger. When Thomas is always tried to stop the mugger from stealing his wife's pearl necklace, he photographed Thomas and his wife in front of the 8-year-old Bruce. The mugger were never brought to justice for fear of running away.

On that very night, on the street were covered with the blood of their parents, and the young Bruce vowed to drive his brother away from his parents's lives. He swears that what happened to him will never happen to anyone else. With his unnatural strong will and the wealth of his family, he spent 10 to 12 years old traveling around the world looking for the best ideas for martial arts, criminology, escapology, disguise, and the craft of detecting. While he adjusted to his body and mind to the peak of human physical and mental perfection. Upon he returned to Gotham after his first night as a criminal fighter, he sat in his father's study, and the bat suddenly rushed through the window.

From his teachings, Bruce was remember that criminals are superstitious and cowardly. He used the terrible image of those who came ominously to him and struck the terrorists in the hearts of those who committed evil in his field. It is this image that brought the birth of Batman.

The Justice League is fighting an army of villains led by Lex Luthor. Batman goes to Arkham Asylum to make sure that Luthor did not help the Joker escape. Batman sees a tripwire below the Joker's cell door, which he easily disables and discovers that the Joker has indeed broken out. However, the real trap was behind Batman in the form of Deathstroke, whom Batman proceeds to defeat. Batman then teleports to the JLA Watchtower, where Luthor forces him to fight one of his henchmen, Bane. After defeating Bane, Batman throws explosive Batarangs at Luthor to weaken him. Batman then defeats Luthor and uses a special device to deactivate his armor.

However, Lex reveals that the Joker and Harley Quinn have a nuclear bomb prepared and ready to detonate in Metropolis. Batman sends out a Red Alert and beams over to the Joker, who prepares to activate the bomb. Wonder Woman, Aquaman, Green Lantern, Green Arrow, Hawkgirl and the Flash arrive to help Batman, but in that moment, they are all transported to a different Metropolis. An enraged Joker fights Batman, but loses. The Regime's troops then surround Batman and the Joker, but Batman escapes by using a sonar disruptor and smoke grenades. After watching a conversation between troops from a rooftop, Batman realizes that he is in a different world.

Later on, Batman tries to intercept the Joker, but the Joker takes him out with a groin attack. After the Joker escapes, Hawkgirl and Yellow Lantern arrive and take Batman to Stryker's Island, believing him to be the Batman native to their reality. There, Batman encounters the alternative Superman and Wonder Woman. Superman, known in the alternate reality as the High Councilor, realizes that Batman comes from a different universe and tortures him in order to find out why he was here.

High Councilor Superman then announces that Batman will be executed in an attempt to lure the alternate Batman out of hiding. Although they know of this trap, the Justice League, who have formed an alliance with the alternate Batman, managed to save their Batman and escape. The evil Superman then kills the alternate Lex Luthor and his own lieutenant, Shazam, causing the alternate Flash to defect to the Insurgency and expose the evil Superman's plan to destroy both Gotham and Metropolis before traveling over to the Justice League's own Earth and completely obliterating it.

As the assembly team tries to figure out a way to defeat the High Councilor, the alternate Batman reveals his intention to send Batman and his allies home so that they can be prepared to fight against the evil Superman. However, Batman's main recommendation is to bring the good Superman over to the alternate universe. Alternate Batman opposes this plan, but at that moment, the Regime's forces attack the Insurgency base.

After Batman defeats the alternate Bane and returns to the Batcave, where the interdimensional teleporter is being prepared, the alternate Batman still wants to send the prime heroes home, but Batman refuses to let him follow through with it. The two Dark Knights fight a short battle, with prime Batman winning and persuading his alternate self not to give up hope. With his newfound determination, alternate Batman agrees to bring Superman over. Superman manages to defeat his evil counterpart and ends the war. Batman then catches the Joker and brings him back to Earth with the help of an alternate Harry Quinn.

When Brainiac invades the earth, Batman has no choice but to ally with the former members of the regime, though he suspects they will eventually turn on him once Brainiac is defeated.

Bad Ending: Superman takes over his former best friend but he chooses to knock him out instead of killing him because it would make him a martyr. Later, Superman comes to see Kara held captive to tell her that he has killed Brainiac and merged with his telechnology before a Batman under the control of the Kryptonian joins him, to the horror of Supergirl.

Good Ending: Batman ends up beating Superman and knocks him out and then falls to his knees after this intense battle. He apologizes to Supergirl for not saving Clark. Later, Batman takes the two Kryptonians to the Fortress of Solitude where he removes all of Superman's powers thanks to the golden kryptonite before sending him to the Phantom Zone. He then reassures Kara that her symbol will always signify hope as long as she wears it before offering her to join her circle of trust.

Batman retains many of his classic characteristics from the comics up until Superman begins his campaign for world order. Batman initially thought that Clark might murder the Joker because of grief and revenge for Lois and the death of his children.

When Damian Wayne helped Superman in moving the prisoners of Arkham Asylum to an unknown facility, but Damian accidentally killed Dick Grayson. This and their recent disagreement over Superman's actions prompted Batman to reject Damian by killing his "real" son. Dick's death has destroyed him to the point of self-harm, because Bruce constantly beats the training dummy until his hand begins to bleed. After Selina was stopped him, Batman has began to mourn for his first son.

No longer willing to trust Clark or any of his followers, Batman began the Insurgency to stop them. Although he is willing to share his identity with them, Bruce's trust in others has been reduced by other heroic acts. He continues to keep secrets to ensure that no one will betray him, keeping Martian Manhunter's involvement secret as a way to keep him. Under the packaging.

Over the next five years, Bruce lost many of his closest allies in the fight against the Regime, among them being Oliver Queen, Alfred, Jim Gordon, Tim Drake, Renee Montoya, and Kate Kane. Oliver was killed by Superman when the latter thought he was trying to hurt Diana and him, Alfred was murdered by Victor Zsasz on orders from Superman, Jim died of overusing the Kryptonian strength supplements which had accelerated his cancer to being terminal, and Tim was imprisoned within the Phantom Zone by Superman as an Ultimatum for saving Superboy's life. These losses completely changed Bruce's view of Clark, now believing him to be a tyrant.

However, during Injustice 2, despite what happen, he still seems to care about everyone, inculding the regime. It was shown when Batman tells Supergirl that he'll miss Superman too, continuing to say that he was his best friend and that he'd missed him ever since. 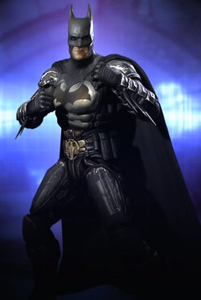 Batman as he appears in the Regime Universe. 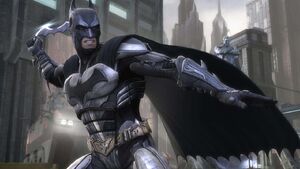 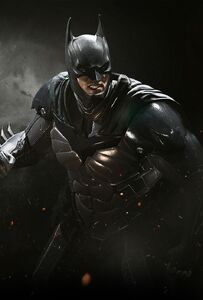 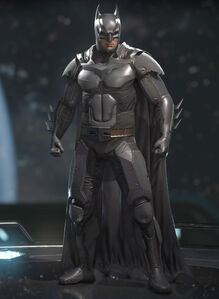 Batman in the alternate ending.

Batman with Supergirl, apologizing for not being able to save Superman.

"Welcome to the Circle of Trust."