Batman is the main hero of his video games, based on his original comic book incarnation. His goals are mixed, but mostly involve saving Gotham City from criminals and villains.

After Darkseid's apparent defeat, invaders from another dimension began appearing. Batman intervened and stopped a rampaging The Flash, who had been overcome by Kombat Rage, from killing a defeated Kano, only to be challenged by Flash to a fight. Batman was overwhelmed by the Kombat Rage fueling Flash and was defeated, having to resort to taking him down with his taser. Bringing Flash to the Bat Cave, he tried to run some tests on the rage that consumed his teammate, but Flash suddenly disappeared and was replaced with the ninja spectre Scorpion. Thinking the Dark Knight was Sub-Zero in disguise, Scorpion attacked Batman despite his dazed shape and was captured.

When another power anomaly appeared in Gotham, Batman was forced to take Scorpion with him. Arriving in the city, he was then forced to fight his archnemesis, the Joker. Defeating the Joker, Batman was surprised by the sudden appearance of Liu Kang. The rage in the monk made Batman appear as Shang Tsung and another fight ensued with Batman emerging the victor, but at the cost of Scorpion and the Joker escaping. Via Green Lantern, Batman took Kang to the U.N. orbital station, where he discussed that Earth might be in for another invasion. Raiden, the god of thunder, suddenly appeared and demanded Kang's release. Batman refused without obtaining answers and in a following fight, he was able to resist the god with his insulated armor, but Raiden still got away with Kang.

Returning to the Cave, Batman found Sub-Zero searching for Scorpion. Even with the rage powering him up, Batman was defeated by the Lin Kuei warrior. Batman then deduced that, through the magic of the two worlds merging, the other heroes and villains were gaining incredible strength. This was demonstrated when Joker defeated Batman in a fight. Subduing the maniac clown, Batman brought them both to the formed team of heroes and villains where they learned that a being named Dark Kahn was causing the worlds to merge and everyone falling into the rage. Batman again fought Sub-Zero when the defenders of Earthrealm and the D.C. heroes fought in a final battle. The Dark Knight calmed Superman when he too fell to the rage and nearly killed both Batman and Lex Luthor. Superman then teamed up with Raiden to defeat Dark Kahn and separate the worlds. Shao Kahn remained and was banished to the Phantom Zone.

Go to the Arkhamverse version for more information.

Batman is the main protagonist of the Batman: Arkham games, which are set within the "Arkhamverse".

The urban myth of the Batman; a bat-like spectre that swoops on the corrupt and protects the innocent in Gotham City, is a well known tale told amongst the criminal underworld that warns them never to trust the shadows. What they don't realize is that the urban myth is real.

Motivated by a tragedy from his past and having dedicated a vast span of his life to honing his physical and mental abilities to near-peak human potential, the Batman is a deductive-minded vigilante who operates within the city of Gotham to eradicate crime and corruption and to bring peace and justice back to the streets.

Go to the Injustice version for more information.

Batman is the main protagonist of the Injustice series.

Go to the Telltale version for more information.

Batman is the main protagonist of the Telltale series. 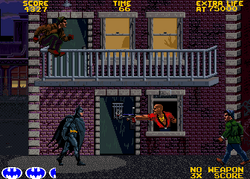 Screenshot of Batman for arcade 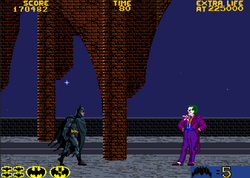 Batman vs. Joker (Final Boss of Batman for arcade) 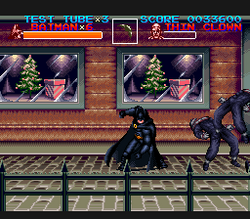