Investigate the incident and find his mother with his friends from kidnapping by his fallen father Raizo.

Batsu is known for being foul-mouthed, belligerent, and impulsive but at the same time he has a strong sense of justice and a kind heart. He is often misunderstood due to his forward and rough personality. His dislike for dogs was due to the fact that he was bitten by one when he was little, although he could no longer remember exactly when; nonetheless, it was a traumatic experience for him.

Batsu has short spiked black hair and black eyes and has an X scar on the right side of his forehead. In the opening and ending themes as well as his crossover appearances his hair is changed to dark brown.

His primary outfit is a blue long sleeve short jacket under a gray sleeveless mesh shirt with two light blue lines in both sides of his jacket, blue pants, shins and red and white rubber sneakers. He also wears a red fingerless gloves on both of his hands.

As Burning Batsu in Project Justice, he is seen without his short jacket and his pants has been tattered due to his vigorous training and absence. He also has a bandage on his left cheek and gains scratch marks all over his body underneath his sleeveless mesh shirt as well as the X scars on both of his shoulders identical to his father Raizo's. He has pale blue wraps on both arms.

In Rival Schools: United by Fate, he is introduced as recently transfered student to Taiyo High searching for his mother, Shizuku Ichimonji. Joined by Hinata Wakaba and Kyosuke Kagami, Batsu finds the person responsible for it is his long-lost father, Raizo Imawano. His individual ending in the game reveals he saves his mother and makes peace with his father.

Following the sequel Project Justice, Batsu appears as the main hero again, but he's being dogged that he's repsonsible for the local attacks on other schools. The following story of Taiyo High illustrates 2 alternate fates for him. Whether he challenges the allegation with the assistance of fellow high-school students from Pacific High, or disappears for the period of time before going back with increasing fighting spirit. 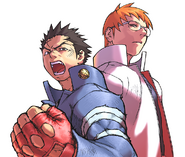 Batsu, with his friend Kyosuke. 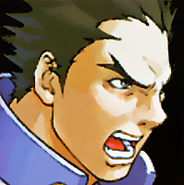 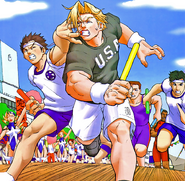 A race with Roy Bromwell. 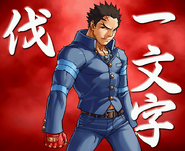