When Lucemon succumbed to his lust for power and became rithless tyrant, Ten Powerful warriors rise up against him, Eight of the ten were left wounded and became the digi-sprit were they soul remind, the other two were AncientGreymon and AncientGarurumon who after winning the battle follow the steps of his brother, After the battle their spirits were protected by Opanimon, Seraphimon and Cherubimon.

The Battle Spirits are composed of Twenty, one representing the Human form and the second represting the beast form. 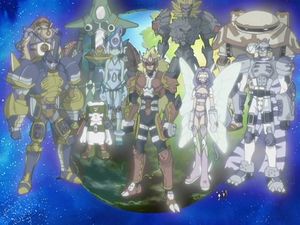 Retrieved from "https://hero.fandom.com/wiki/Battle_Spirits?oldid=1735577"
Community content is available under CC-BY-SA unless otherwise noted.