Serve the United States of America.

Defeat the Flag-Smashers. (both succeeded)

Sergeant Major Lemar Hoskins, also known as Battlestar, is a character from the Marvel Cinematic Universe, he is a major character in the Disney+ series The Falcon and the Winter Soldier. He is a United States Army officer and best friend of John Walker, who succeeds Steve Rogers as the new Captain America. Hoskins stood at Walker's side as his partner, and worked with John to stop the Flag Smashers until his death.

He is portrayed by Clé Bennett.

Lemar Hoskins was born to unnamed parents and had a sister, and also worked with his family's flower business as a child. During his time at high school, he met and became friends with football team captain John Walker. The two grew closer together and formed a strong bond that would follow up until they were adults. Once high school was over for the duo, they joined the U.S Military. They fought side by side for years, earing and stacking up many rewards for their time and bravery. Once they both left the service, they subjected themselves to the Power Broker.

After the death of Steve Rogers, Walker became the new Captain America leading to Lemar receiving the name, Battlestar.

Vs. The Flag Smashers

Lemar and Walker both stepped up to their new roles as heroes to take down the terrorist organization known as the Flag Smashers, lead by Karli "Flag Smasher" Morgenthau. Walker hacks into Falcon's mechanical companion Redwing to locate him in Munich, Germany, and intercepts Falcon and James "Bucky" Barnes, the former Winter Soldier, chasing the Flag Smashers, who have just stolen medicine to give to refugees. Walker and Hoskins arrive to help despite the Falcon and Barnes' resistance. The Flag Smashers escape, the pair make an offer to team up, but it is later turned down.

Later, the terrorist Helmut Zemo escapes from prison, with help from Wilson and Barnes, to track down the Super-Soldier serum that the Flag Smashers are using to empower themselves. Walker and Hoskins are assigned to investigate the escape, and Walker was immediately suspicious of Wilson and Barnes.

Walker meets back with Wilson and Barnes in Latvia, confirming to him that they are working with Zemo to defeat the Flag Smashers. Wilson discovers where Morgenthau will be, and requests a chance to speak with her and try to talk her down. Walker agrees, but he and Hoskins go with Wilson, Barnes, and Zemo as backup. Wilson meets with Morgenthau and talks with her, but Walker, fearing her escaping or attacking, loses his patience and goes in to arrest her. She runs and he gives chase until she is attacked by Zemo. During the battle, the vials of Super Soldier serum the Flag Smashers have been using are spilled, and Zemo takes the opportunity to break them all. Morgenthau escapes, and Walker subdues Zemo. However, he notices a vial that Zemo missed, pocketing it for himself.

Walker and Hoskins track Morgenthau and the Flag Smashers, and team up with Falcon and Barnes to fight them off. During the fight, Walker's new superhuman abelites are mad unknown when he displays superhuman strength and speed while fighting the Flag Smashers. However, Walker is held by an incoming Flag Smasher who lines up a perfect strike for Karli but as all hope is lost, Lemar steps in and grabs her to the ground but as they find their feet, Karli punches Hoskins with her superhuman strength into a stone pillar, and he is killed from the impact.

Walker is devastated by the loss, and flies into a rage, chasing down Flag Smasher Nico Kovaczsik through the streets of Latvia. He chases Kovaczsik down and knocks him over, demanding to know where Flag Smasher went. When he refuses to tell, Walker, in a fit of rage, bloodily and brutally kills him in public with his shield. The event is witnesses by Wilson and Barnes, as well as much of the public who record it on their electronic devices. Due to his actions, Walker lost the mantle of Captain America, and had the shield taken away from him by Falcon and Bucky. After being discharged from the army, Walker visited Lemar's family to give his condolences, and falsely told his parents that he killed Lemar's murderer. However, Walker would go on to hunt Karli down in an attempt to avenge Lemar's death and Karli was eventually shot dead by Sharon Carter, finally avenging Lemar. 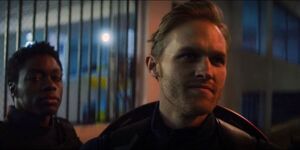 Lemar sees Walker tell Sam and Bucky to stay out their way.