Batwing is a fictional comic book superhero appearing in publications by DC Comics. Within DC Comics internal continuity, Batwing is one of several superheroes patterned after the famous superhero Batman. Batwing, in particular, was conceived by Batman as his crime-fighting counterpart overseas, 'the Batman of Africa'.

The first Batwing is David Zavimbi, a Congolese police officer, created by writer Grant Morrison within the pages of Batman Incorporated prior to receiving his own eponymous series. Following later events within Batman Incorporated and Batwing, Zavimbi is replaced in the role by Lucas "Luke" Fox, an American mixed martial artist who had been Batman's first choice in the role, who is also the son of Batman's close associate Lucius Fox.

Batwing faces a roster of adversaries ranging from international super villains to the Democratic Republic of Congo's corrupt police force. Batwing expands the DC Universe by taking place in Africa, making David Zavimbi both the first (in continuity) black Batman and one of the few characters headlining a series outside the United States. Fox is also black, and becomes the first in-continuity African American Batman.

David Zavimbi was born in Congo, Africa to unnamed parents, and is distant relative to the ruling family of Mtamba. When the last member of the family, Jezebel Jet, went missing in Gotham City, David was chosen as the new figurehead of the country. David promised the local oligarchs and the foreign bankers that business would continue on good terms, and they allowed him to live as a millionaire.

David Zavimbi operates as Batwing who is a representative of Batman Incorporated from the city of Tinasha, within the Democratic Republic of Congo. In his civilian identity he is a police officer fighting against corruption in the department. Using an arsenal of advanced technology supplied by Batman, his Batwing Suit is a powerful exo-skeleton. With his manservant Matu Ba, he wages a one-man war against evil to protect the city of Tinasha. He has been a member of Batman Incorporated, the Batman Family, the Kollektiv and Justice League International.

Zavimbi's successor is Luke Fox, the son of Lucius and Tanya Fox, who operates in Gotham City and became a member of the Batman Family. In addition, Luke began a romantic relationship with Barbara Gordon (Batgirl), and would help his allies defeat criminals and the Batman's rogues gallery.

Lucas "Luke" Fox is the son of Lucius and Tanya Fox, and the brother to Tam, Tiffany and Tim Fox, and was presumably born in Gotham. Luke and his family lived off his father's wealth, as Lucius worked under Bruce Wayne as the CEO and president of Wayne Enterprise. Luke showed himself to be highly intelligent just like his father, and went of to M.I.T. after graduating from high school, and gained degrees in engineering and business. However, Luke wanted to become a member of the Batman's party, and specifically started doing MMA and cage fighting to get the Dark Knight's attention.

When David Zavimbi retired from his career as Batwing, Batman recruited Luke to become the successor, siting that Fox was his first choice. Luke quickly accepted the position to become the next Batwing, and lied to his father about his whereabouts, as Lucius had become angry with his son's recklessness in participating in cage fighting. During his tenure as Batwing, Fox helped Jim Corrigan investigate events in Arkham Asylum, and began a romantic relationship with Barbara Gordon, also known as Batgirl. Fox would later become a tech support member of Batman's team, and later became accepted as a member of the Bat Family when helping them stop the Penguin. Additionally, Lucas would help Azrael (Jean-Paul) create a new suit to prevent the spirit of Azrael from taking him over, and revealed this to his allies after they subdued him. 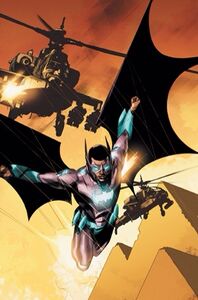 Batwing with the Bat Family/Gotham Knights. 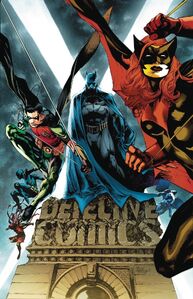 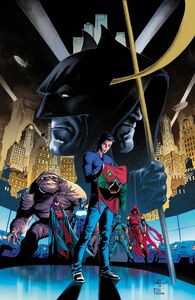 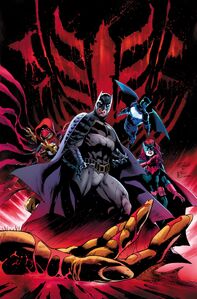 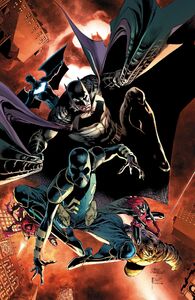 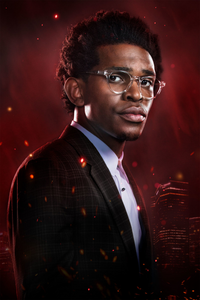