Beast (also known as Dr. Henry Philip "Hank" McCoy) is a fictional character and superhero from Marvel comics, and a member of the X-Men and a genius despite his animal-like appearance. He is also a mutant and is incredibly agile and strong with distinctive blue fur covering his entire body. In fact, Beast is both the brains and brawn of the team, preferring to think his way out of danger but more than capable of putting up a fight if he feels threatened or that his friends are in danger.

Beast was created by the late Stan Lee and the late Jack Kirby, and first appeared in X-Men #1 in September of 1963.

Beast was born "Hank McCoy" son of Norton and Edna McCoy. When Hank was born he had enlarged hands and feet, and as would be found out latter in his childhood a substantially high I.Q.. A medical exam of Hank and then his parents revealed the cause, Norton who worked at a power-plant had been exposed to high doses of radiation during a melt-down and it had effect his reproductive properties.

Hank's high I.Q. lead him to be a very curious child, taking things apart, putting them back together, finding out how everything worked around him and retaining nearly every bit of information he gained. Hank was luckier than most mutants as his parents not only loved him unconditionally but were supportive of him. However though Hank possessed supportive parents he encountered more than a few cruelties at the hands of class-mates. Hank would eventually be signed up to the football team after the coach saw him kick the skin clean off a ball one day.

Hank became his high-school's most valuable football athlete, though this made him more accepted among the town and his teachers, the other players only began to harass him more for making them look bad. Hank's good grades and athletic pursuits easily afford Hank a scholarship to college and allowed him leeway into professional sports as well.

One day three robbers held up the stadium Hank was at. Hank used his, by then super-human athelteic agility and strength, to foil the robbery. The event was covered by the local news, but unfortunately this allowed the villain known as El Conquistador to hear about Hank and manipulate the situation. El Conquistador kidnapped Norton and Edna McCoy and used them as hostages to get Hank to rob a nuclear plant for him. Hank did as he was told but when he returned El Conquistador decided he would keep the McCoys as hostages to keep Hank as his super-powered errand boy. Hank tried to escape with his parents but was badly hurt in the attempt. The mutant powered robbery had gotten the attention of the X-Men, who were dispatched to stop him.

Once the X-Men found out the situation they helped Hank, Norton and Edna and defeated El Conquistador. Hank expressed his gratitude and the leader of the X-Men, Charles Xavier, offered Hank a place in his Xavier Institute for the Gifted and a place on the X-Men. Hank accepted the offer and continued his schooling at the Xavier Institute. Hank continued as a formal team member of the X-Man well after graduating.

After graduating Hank took a job as a geneticist at the Brand Cooperation. he worked for a man called Dr. Carl Maddicks and became romantically involved with his fellow researcher Dr. Linda Donaldson. Maddicks wanted to unlock the secrets of mutant genes to provide a treatment for them and had McCoy and Donaldson assist him in his research. Though Hank was somewhat trepidations Linda helped put his ethical concerns to rest, assuring him he must think of the research and how it could help mutants and not how it might be abused later on by politicians. With his concerns assuaged Hank used his own D.N.A. as the base for a good deal of their work.

One day Hank made a break-through and rushed to Dr. Maddicks, only to find him discussing theft of government files with Donaldson. As it turned out Linda was an agent for a secret organization called The Secret Empire, who had been planted to keep an eye on Maddicks, who was auditioning for the group, and to keep Hank working for them. Hank, realizing there was no-one at the Brand Corporation he could trust, decided to test his formula on himself and once it was confirmed successful take it out of Maddicks' and Donaldson's hands.

Hank would soon find that the formula was quite flawed. Hank grew gray fur all over his body, gained protruding canines and gnarled claws. Hank had not cured his genetic condition but only made it more apparent. Though ultimately a failure, the Secret Empire would still pursue Hank for some time in hopes of recovering the formula to use as a base for their own plans to create an army of augmented super soldiers.

Hank, no longer able to pose as a human took up the least offensive of his high-school nicknames "The Beast" and returned to the X-Men full time. Since his full mutation Hank's speed, Agility and strength have only increased. Hank has gone on to be a top genetic researcher, a lawyer and a mutant advocate. Hank is one of the few immediately apparent mutants who the congress keeps on hand to speak up on mutant concerns.

The mutant population's much maligned political antagonist Senator Robbert Kelly, viewed mutants as a serous threat to the world at large and tried to pass numerous initiatives to keep the public safe from them, however one of the few mutants he could stomach talking to without descending into redirect, and by extension the only mutant who could talk to him without resorting to violence, was Hank McCoy AKA the Beast. 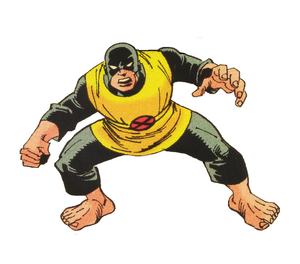 Beast, prior to his full mutation.

Beast, after to his full mutation. 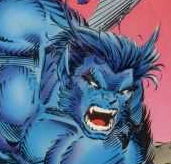 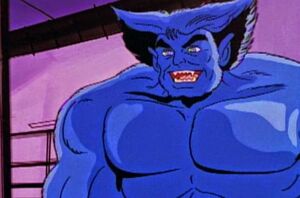 Beast in the X-Men animated series. 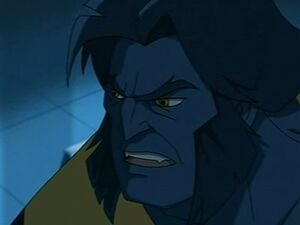 Beast in Wolverine and the X-Men. 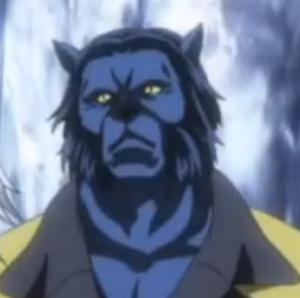 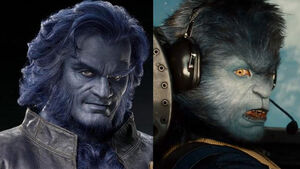 Kelsey Grammer and Nicholas Hoult as Beast in the X-Men films. 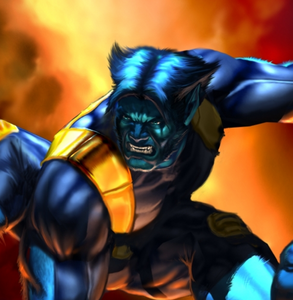 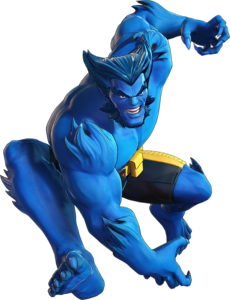 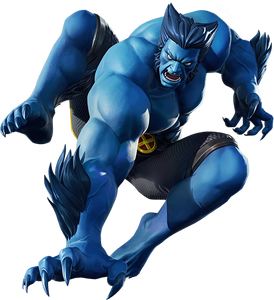 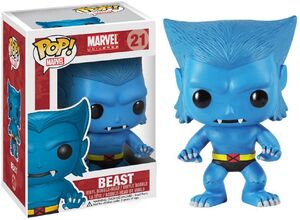