NOTE: This article is about the incarnation of Beast from the X-Men film series. The mainstream version can be found here: Beast.

Doctor Henry Philip "Hank" McCoy, also known Beast, is a character from the X-Men Movies, playing a supporting role in the original timeline, and later plays a major role in the revised timeline.

A child prodigy with the mutant ability of enhanced superhuman capabilities, Hank would become a member of the X-Men when the Hellfire Club attempted to cause World War III during the Cuban missile crisis. He continued to serve as one of Professor X's closest allies, helping in defeat Apocalypse and D'Bari, and stopping Magneto from killing Leech.

He was portrayed by Steve Bacic in a cameo in X2: X-Men United, by Kelsey Grammer (who also played Frasier Crane in Cheers and Frasier) in X-Men: The Last Stand and X-Men: Days of Future Past, and by Nicholas Hoult (who also played Jack in Jack the Giant Slayer and Nux in Mad Max: Fury Road) in the prequel X-Men: First Class, X-Men: Days of Future Past, X-Men: Apocalypse, in his cameo in Deadpool 2, and in Dark Phoenix.

Hank McCoy was born in the 1940s as a child prodigy, having graduated Harvard at age fifteen. He was eventually recruited to work as a researcher for the CIA's "Division X", wherein he investigated supersonic flight and built the Cerebro prototype. At some point in his life, Hank would discover his mutant gene, and decided to hide it from his employers.

McCoy makes a brief appearance in X2, being interviewed by a talk show host about the mutant debate.

After gaining the position of Secretary of Mutant Affairs within the government, McCoy stopped taking his serum and allowed his mutation to be known publically. When he learned of Warren Worthington II's project to use the mutant child Leech to create a serum that could cure any mutant, he left and informed Professor X and Storm of the news. After meeting the child at Worthington Labs, Hank decided to leave his position since the president didn't inform him of the making of a cure. McCoy would later learn of Charles' demise by Jean Grey, and would attend his funeral alongside Xavier's students and colleagues. Following the funeral, Beast would learn from Wolverine of Magneto's army and that they are traveling to Worthington Labs to kill the child and take the cure.

Sensing the urgency of the situation, Beast decided to rejoin the X-Men and help them protect Worthington Labs from Magneto and the Omegas. During the battle, Beast assisted Wolverine in defeating Magneto, injecting him the cure, which is later revealed to only stop a mutant's abilities for a short while. When Jean turns into the Dark Phoenix and causes major destruction of the island, Beast helps everyone evacuate while Wolverine mercy kills Grey. Afterward, McCoy would become the United Nations' ambassador to help mutants and mankind unite.

Beast was among the many mutants killed by the Sentinels, who started to wipe off all mutants and humans across the world. What was left of the X-Men made a last ditch act to undo the present by going into the past, having Wolverine enter the subconscious of his past self so he could prevent Mystique from killing Bolivar Trask. Once Wolverine was successful, Beast is shown to be alive in the present at the X-Mansion.

One day, he was approached by the Man in Black, Charles Xavier, Erik Lehnsherr, Moira MacTaggert, and Raven Darkhölme during the early formation of the X-Men as a black ops group. When Charles accidentally exposed him as a mutant, the urbane Hank displayed his physical mutation of prehensile feet and agility; greatly impressing Raven. He became instantly smitten with her, and a budding attraction was evident between them.

Hank revealed that he had been working on a serum to cure his physical mutation but leave his abilities intact. He believed that Raven's ability to alter her appearance would hold the key to perfecting it. He requested a sample of her blood, during which they shared each others' wish to appear "normal" as well as a kiss.

However, Erik's constant validation of her true beauty and self overturned her opinion, and when Hank finished the serum she refused to take it. He returned to his lab and injected himself and his animal-like feet seemed to revert to normal. However, they quickly changed back and McCoy underwent a radical transformation which resulted in him manifesting blue fur all over his body and taking on a more beast-like appearance with the addition of fang-like teeth, pointed ears, and claws. The serum had the opposite effect he'd intended, it enhanced his mutation instead of dampening it.

After trashing his lab, he left a note and a box containing the team's suits and met them at the hanger holding their stealth jet of his design. Mystique remarked that he was "beautiful" and this was "truly who he was meant to be." After lashing out at Erik when he remarked "Never looked better", Hank was given the codename "Beast" by Havok, who thought his new appearance was great. Beast then flew the team to Cuba to deal with Sebastian Shaw and his Hellfire Club. After Erik forced Shaw's submarine onto the beach, Beast assisted Havok in fighting Azazel until Summers was rescued by Banshee. After defeating Shaw's allies, Erik emerged from the sub with Sebastian's corpse, and explained to his fellow mutants that mankind was the real threat.

When the United States and Soviets launched missiles at the beach, Erik managed to stop them, and Beast and the others tried to stop the scrimmage between Erik and Charles. Beast would then witness Erik leave with Mystique and the Hellfire Club and assisted Xavier, who stated that he couldn't feel his legs after being wounded by Moira's bullet.

In the 1970s, McCoy is still at Xavier's side at the X-Mansion, where he created a serum that allowed Charles to walk at the cost of losing control of his powers. Hank would have an encounter with Wolverine, but would explain of Charles' current predicament of abusing the serum since he lost his best friend, adoptive sister, and several students due the draft for the Vietnam War. Once Charles changes his mind to help Wolverine, the latter states that they need Magneto's help as well, who is imprisoned under the Pentagon for the assassination of John F. Kennedy. Seeing that they needed to break into the Pentagon, the group recruited Quicksilver to use his super speed to rescue Erik. Afterward, the group headed to Paris to prevent Mystique from killing Trask, but Erik would try to kill Raven so he could save the future.

Beast would stop him by shifting into his animal form, but was stopped from killing Erik and left the scene due to the arrival of police. Meeting with Charles and Logan, Hank initially thinks that the future is unchangeable, explaining that you can't stop a ripple when one throws a pebble into the water. However, Xavier states that one can stumble off their path but are not lost forever, regaining his strength after meeting his future self. The group then headed to D.C. and managed to prevent Mystique from killing President Nixon, which leads to Trask's Sentinel project being discontinued and changing the future.

With mankind developing a more positive look on mutants, Charles' school re-opens and Hank becomes a teacher, but still uses the serum to mantain his human appearance. When En Sabah Nur arrived and started to cause mass destruction across the world, Beast rejoined the team with Mystique, Quicksilver and new members Cyclops, Jean Grey, and Nightcrawler to rescue Charles before Apocalypse could transfer himelf into the professor. During the battle, Beast fought against Psylocke, and later assisted the team in defeating Apocalypse as Jean used hers powers to kill him.

Beast and the young characters make a cameo in Deadpool, appearing behind Wade Wilson ask he asks where the other X-Men are when he appears in any secene of the mansion. Before Wade could be aware of their presence, Beast closes the door.

In the 1990s, the X-Men are tasked with helping the astronauts of the Endeavor, and during the mission, Jean absorbed the Phoenix Force. Once returning to Earth, Jean's powers become unstable as she starts to attack students, and she leaves the mansion to find her father at Red Hook. Going to her family home, the team try to calm Jean, but she accidently causes the death of Mystique and leaves the area. McCoy mourns Raven's death alongside his allies, and blames Charles for it before leaving to Genosha to inform Erik of her passing. Beast would join Magneto's side to find Jean and kill her, and fights his former allies before they are all captured by the United States Military.

Beast would let go of his vendetta after being convinced by Scott and Xavier, and helps his allies fight against the D'Bari, who are trying to take the Phoenix Force themselves. After Jean defeats Vuk and leaves the planet, Beast returns to the mansion and becomes the dean of Jean Grey's school for gifted youngsters.

Hank is one of the few pure good mutants in the world, having never wavered into the darker side, mutants like Magneto and Shaw have created. While always on the side of good, during much of his youth, Hank was ashamed of his mutant heritage. McCoy tried to hide his abilities, in fear others would judge him, even going so far as to create a cure that would strip him of his mutant DNA. Eventually with the help of Charles Xavier, he learned to accept his mutant nature and became a very important figure in the mutant world.

Over many decades (and in both timelines), Hank has protected both human and mutant-kind, both on the battlefield and in the courtroom. He helped Charles build his school for Mutants, serving as a teacher and mentor for many years. Hank eventually left the school and has been working for mutant rights, even taking up a government position, becoming the head of mutant affairs to the President.

Hank is brave and selfless, willing to sacrifice his own life for the protection of his friends and family. Usually, Hank carried himself with a very polite demeanor unless aggravated. His greatest attribute is his near superhuman intelligence, which has gotten himself and the X-Men out of many bad scenarios. Hank has a brother-like relationship with Xavier, remaining by his side even at a time when Xavier did not believe in himself, helping him create the X-Men and staying with Charles to help his school grow. He also formed a close friendship with Scott Summers, designing special glasses and a visor for the boy and working closely with him during the battle against Apocalypse and his horsemen. This friendship probably due to Hank's friendship with Scott's late brother, Alex. 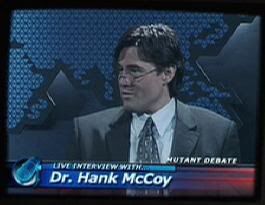 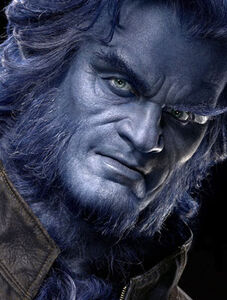 Beast in X-Men: The Last Stand. 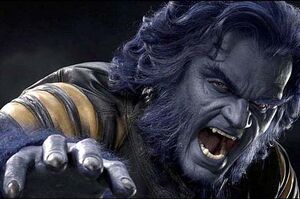 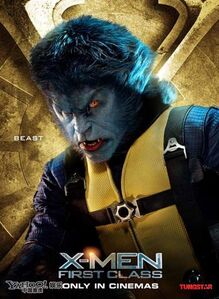 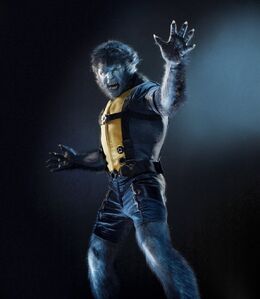 Beast revealing his mutation to the group. 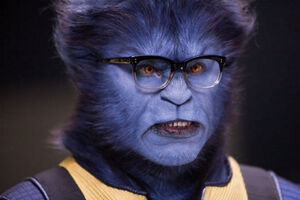 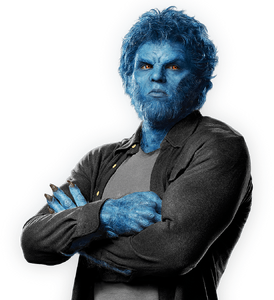 Young Beast in X-Men: Days of Future Past.

Older Beast at the end of X-Men: Days of Future Past. 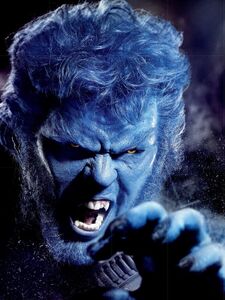 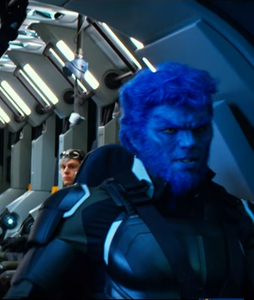 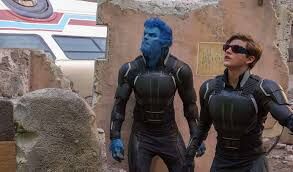 Beast and Cyclops during the final battle.

Beast in the Danger Room with the X-Men. 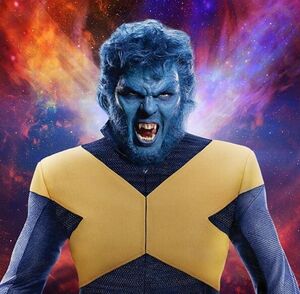 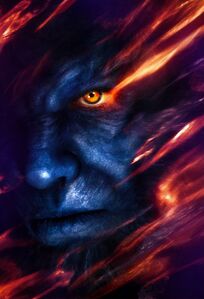