Be a respected hero.

Save people from evil threats.

Beast Boy (real name Garfield "Gar" Logan), also known as Changeling, is a fictional character and superhero from DC comics, being the main protagonist of his titular comics, and a major character in the Teen Titans comics.

He is a member of the Doom Patrol and later Teen Titans and is named for his ability to transform into any kind of animal he wants. He is the jokester of the team and likes to mess around but is also very loyal to his friends. Even after losing his family and his adoptive family and being sold out by his first girlfriend Gar seems care-free and easy going preferring to look on the bright side of life rather than submitting to sorrow and angst.

He was created by the late Arnold Drake and the late Bob Brown (as Beast Boy), Marv Wolfman and George Pérez (as Changeling), and first appeared in Doom Patrol #99 in November of 1965.

Beast Boy has appeared in numerous cartoon television shows and films, including as one of the Teen Titans in Cartoon Network's eponymous series, voiced by Greg Cipes. Gar Logan makes his live adaptation debut in the DC Universe series Titans, played by Ryan Potter, who also voices Hiro Hamada in the Big Hero 6 film and series, and portrayed Mike Fukanaga in Supah Ninjas.

Garfield Logan was the son of doctors Mark and Marie Logan two well respected biologists. The Logans had gone to Africa to study a variety of new and less documented species of animal and took their son with them on the trip. While Mark Logan was collecting data and parts for a machine he hoped would be able to breakdown the barriers between human and various animal DNA his wife was out collecting samples for it and documenting any rare animals during her expeditions, this left Garfield to create his own amusement and he often went out to explore. Mark Logan eventually had a breakthrough with his device and left to tell Marie only to find Marie tending to Garfield.

Garfield had gotten sick several days prior and his mother was tending to him but did not want to disturb Mark during his research hoping the condition would clear up with a few days of bed rest and nurturing. Once he found out about his son's illness Mark gave Garfield a physical, the exam soon revealed he had contracted a rare and very fatal disease with no known cure.

In a desperate act Mark and Marie decided the only thing to do to save their son was to use Mark's new machine on Garfield to breakdown parts of his genetic code, for the disease only affected humans and not animals, though untested the only alternative was to let their son die. The treatment worked though with a slight side-effect of leaving Garfield's skin and hair green. Though the green never cleared up Garfield's parents were concerned about the condition but over all elated, that not only had Mark's machine been proven effective and more or less safe but their son's new genetic code allowed him to overcome an otherwise deadly disease.

The Logans would eventually find though that there was another side-effect, one day Marie was attacked by a deadly Black Mamba snake, she was saved though by Garfield who had turned into a mongoose to kill it before it harmed her. It seemed Mark's machine had broken-down the bits of code between human and various animals so far that Garfield could actually rearrange his code to become animals, though Garfield seemed not to know how for some time his desire to save his mother had instinctively triggered the transformation.

Alas even with their various close calls the Logans would eventually still meet a tragic end. Many years after his powers were discovered Garfield would be left an orphan when his parents died in a boating accident Garfield was taken in by a local chieftain named King Tawaba who was a friend of his parents. Tawaba cared for Garfield as a ward of sorts but Garfield had earned the ire of Tawaba's witch-doctor, Mobu, who had a strong dislike of the Logans who had cast much doubt on the notion of superstition over practical medicine in the tribe. Mobu hired two American mercenaries to kill Garfield in exchange for revealing to them an otherwise lost temple with untouched treasures for them to loot. The temple collapsed killing Mobu and trapping Garfield, the two men rescued Garfield from the wreckage and brought him back with them to the U.S. there they forced Garfield to use his powers to help them commit crimes.

The two men eventually shot each-other and Garfield was brought into child protective services once the courts had heard the whole story. Garfield was given to Nicholas Galtry, his parent's financial attorney left to manage their estate. Unknown at the time to Garfield and the courts Galtry was embezzling from the Logans' estate and upon receiving legal guardianship of Garfield began plotting to kill him to avoid having to turn over his ill gotten assets when Garfield surely would begin asking about his inheritance.

Guardianship and the Doom Patrol

The odd legal case had gotten the attention of the Doom Patrol and Teen Titans, Garfield tried joining both groups but Galtry refused to give legal permission for Garfield to join. One day Garfield was kidnapped by a crooked circus owner and hypnotized into becoming his main attraction, the owner was using similar hypnosis on his crowds to have them turn over money and jewelry and used his attractions to collect it. The Doom Patrol got wind of the scam and put a stop to it. The experience was enough to put Galtry's capacity as legal guardian in question since he had not reported Garfield missing and had seemed not to notice, to avoid further allegations Galtry gave Garfield permission to join the Doom Patrol.

For years Garfield, who had taken up the name "Beast Boy", worked with the Doom Patrol and moonlighted as a Teen Titan, however when the Doom Patrol were killed by Madame Rouge (Laura De Mille) and General Zhal Beast Boy went on a journey to find himself. His journey would lead him to another confrontation with Galtry posing as the the villain Arsenal. Beast Boy beat Galtry for the last time. After the experience Beast Boy joined the Titans West and soon became a full time Teen Titan in the main group taking up the name "Changeling" in his new team. 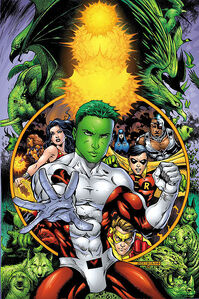 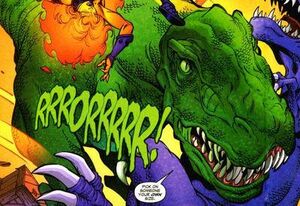 Beast Boy as a T-Rex in the comics. 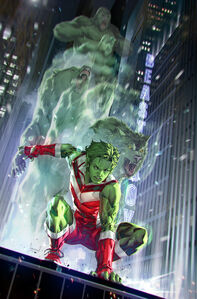 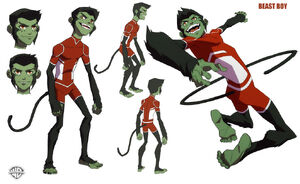 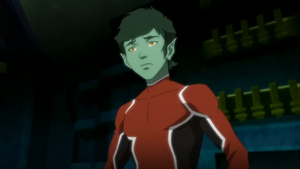 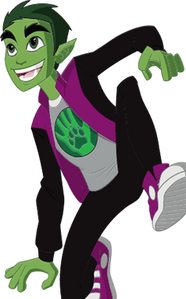 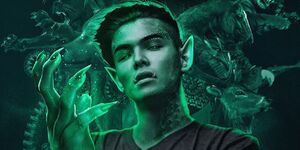 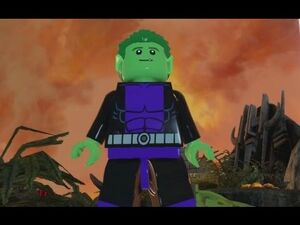 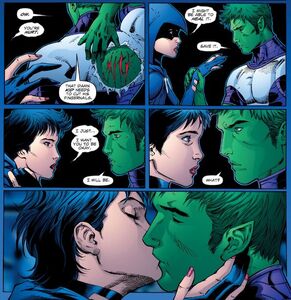 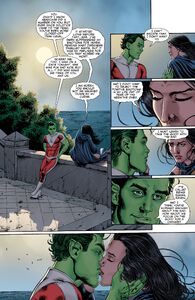