???
Beat is a bird-type combat support robot from the Mega Man series built by Dr. Cossack for Mega Man to help him protect the world. He serves a support role by either attacking enemies or protecting Mega Man, depending on the game.

Beat appears in the Slash Man stage, he is available for rescuing him in the tree by burning the tree. He is able to rescue the player if they fall into a bottomless pit. He cannot hold the player for long and only has a few seconds.

Beat is available for destroying a Party Capsule. He is available on Tengu Man's stage and the second Wily Castle level.

Beat gives the player a shield to protect them from enemies and attacks.

Beat is summoned for buying an item called "Beat Whistle". He is able to hold the player for a short amount of time.

Beat is a advanced support spirit which increases the user's air attacks. It's spirit battle is on the omega form of the Wily Castle stage with heavy winds against Falco and Mega Man who favors grabs and throws.

Mega Man Upon a Star

Scott McNeil did the voice of Beat. He is the assistant of Mega Man. 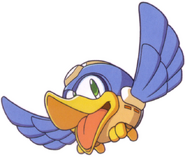