Wait for writing to appear in her book and wait for "They" to show up (abandoned).
Enjoy life with Subaru Natsuki (succeeding).

Hero's Sidekick
Beatrice (In Japanese: ベアトリス, Beatorisu), often called Betty (In Japanese: ベティ, Betii) for short, is a major supporting character turned tritagonist in the light novel, manga and anime series Re:Zero - Starting Life in Another World. She also appears as a minor character in Isekai Quartet, a crossover anime featuring characters from several properties of the "Isekai" genre of anime.

Beatrice was created four hundred years ago by Echidna, the Witch of Greed. Echidna, whom Beatrice considered her mother, eventually left Beatrice in charge of the Forbidden Library where she was meant to diligently wait for a person known only as "They".

Beatrice waited four hundred years for "They" to show up, keeping her desires to abandon her assignment inside. Eventually, Subaru Natsuki convinced Beatrice to abandon her mother's mission and become his contracted spirit.

Since then Beatrice has gone on many adventures with Subaru and has become his closest confidante in the world.

Beatrice is voiced by Satomi Arai in the Japanese version of the anime and by Kira Buckland in the English version.

Despite her long life, Subaru described Beatrice as looking as though she was around eleven to twelve years old. She has large sky-blue eyes with pink butterfly patterns in their centers. Her blond hair is tied with pink ribbons into long drill-shaped pigtails which have pink tips in the anime. Subaru believed that there was no heart that wouldn't melt at the sight of a genuine smile on Beatrice's face.

Beatrice sports a petite crown on the right side of her head. She wears a frilled dress with white trimmings and an open front. Her legs are covered by pink and purple-striped tights and she wears pink shoes. A giant pink butterfly-shaped ribbon is attached to the side of stomach.

Beatrice generally looks down on others and is bad at dealing with people who try to get close to her. Despite being full of bravado, she's a lonely person, and is softhearted beyond her perceived stubbornness. She is affectionate towards Puck because of their similarities and favors him over the others in the Roswaal household. She has a distinct way of speaking, adding "I suppose" at the end of some of her sentences. She also refers to herself in the third person similar to Ram and Rem. 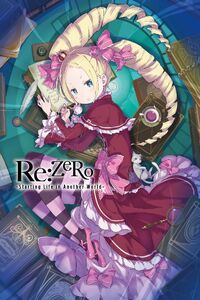 Beatrice on the cover of the third light novel. 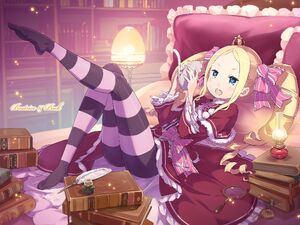 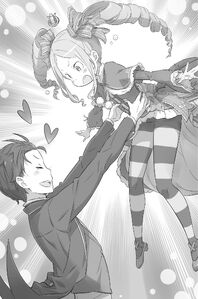 Subaru proclaiming his love for Beatrice.
Add a photo to this gallery

Retrieved from "https://hero.fandom.com/wiki/Beatrice_(Re:Zero)?oldid=1948160"
Community content is available under CC-BY-SA unless otherwise noted.