Spending time with Bill (formerly)
Raising her daughter(currently)
Self-reflection.
hunting her enemies and kill them with no remorse or torturing and intimidating them.

Seek revenge against and eliminate each member of the entire Viper Assassination Squad for Betraying her (succeeded, seemingly excluding Elle Driver)

She abandons her life as a hired assassin for the Deadly Viper Assassination Squad upon realizing she is pregnant with Bill's child, denying him the right of fatherhood. This action provokes the attacks on her and her loved ones and its ensuing revenge, which is the entire basis of the film. She was portrayed by Uma Thurman, a role for which she gained popular public knowledge and massive acclaim. She is listed as one of the most popular action heroes of all time.

Life as a Deadly Viper

Beatrix Kiddo was once a member of the Deadly Viper Assassination Squad, a group of highly trained assassins each working under a snake themed aliases. In the Squad Kiddo went by the name Black Mamba and worked for her employer/lover Bill, code named Snake Charmer. Each member of the squad had one area they excelled at over the others, Black Mamba's was blade master, specifically katana's as a favored weapon. Kiddo was specially trained in martial-arts by a master monk named Pai Mei and was one of only three of the six assassins who would ever receive such prestige training, along with Bill she was also the only one to complete said training. On a routine assassination assignment in China, Beatrix discovered she was pregnant and defaulted on her contract, thanks to her target's own counter assassin, who allowed her to back-out once both realized Black Mamba's baby would drive her into retirement.

Black Mamba disappeared and dropped off the grid to escape her past completely, she set-up a new identity in Texas and picked up a prospective husband who she would pass-off as the father of her child. Bill showed up in Texas on the day of Kiddo's wedding rehearsal. Bill said he had spent a lot of time tracking her down and when he found her wanted to be there for the day of her wedding, though he was surprised to see her pregnant. Both Bill and Beatrix kept their reunion short and details of what had brought each there vague, as neither had a fondness for making a scene in front of civilians. Bill passed himself off as Beatrix's father, who had made it to give her away. To the surprise of the Bride, her prospective groom, the witnesses, Reverend, Reverend's wife and balladeer, Bill was not alone and had his entire remaining squad members march in execution style and annihilate the entire attendance. Kiddo was the last attendant to be put down. Kiddo had been badly beaten before the final blow and managed to get out that the baby was in fact Bill's just as Bill delivered a bullet to her head. The Bride survived the shot but was put into a coma from it, she was taken to a hospital and put on life support as the sole survivor. Though The Deadly Viper Assassin, Elle Driver a.k.a. California Mountain Snake, would show up to finish her off, she was called off at the last second by Bill, who insisted that the one thing they would not do to her is kill her in her sleep, considering it to be a sign of weakness on the Squad's part. Though The Bride would eventually make a recovery, when she awoke she found she was no longer pregnant and that in-fact several years had passed.

Though angry about being stabbed, beaten and shot by her former team mates, Beatrix's loss of her child was what sent her over the edge and she made it the purpose of her remaining life to kill every single member of the Deadly Vipers Assassination Squad. Kiddo started her quest by having a sword forged by a man named Hattori Hanzō, the same man who had made a sword for both Bill and his brother Budd a.k.a Sidewinder. Hattori Hanzō swords were said to each be unique works of art and the greatest blade in the world each at their own specific style of use. Hanzō had retired from his business as well, currently working as a sushi/hibachi chief when Beatrix met him, however Beatrix convinced him to make one final sword for her when she told him she intended to kill Bill, who he had a rather serious falling out with. Once the sword was completed, Hattori Hanzō presented The Bride with his work, a sword crafted specifically to be the perfect tool for The Bride's quest.

Armed with the only type of blade she considered worthy of killing Bill and his Squad Beatrix began the main crux of her quest to wipe-out each member of the Deadly Vipers Assassination Squad, Cottonmouth - the sword-master and crime-boss, Copperhead - the knife master, Sidewinder- the gun master and tactician, Californian Mountain Snake- the trap/poison master and Snake Charmer- the Squad's leader and mastermind. The Bride took on each of her targets one by one saving Bill for the last. 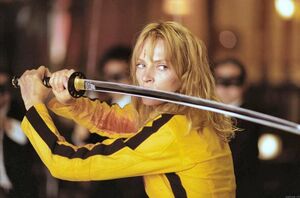