Rebecca "Becky" Barnes is Dave Stutler's gentle girlfriend and the deuteragonist in The Sorcerer's Apprentice.

Rebecca Barns, or more commonly known as "Becky" was in Dave Stutler's 4th grade class. David found Becky irresistible and tried to impress her by lining up a doodle of King Kong with the Empire State Building through the school bus window. Later Dave passed Becky a yellow note asking if she would be his friend or girlfriend. After she checked it, the note blew away, eventually leading Dave to the Arcana Cabana shop. When Dave came out of the shop with wet pants and his classmates ridiculing him about those made-up stories of what happened inside the shop, she could only look at him with a pitiful eye, and he officially blew his first shot at getting her.

Ten years later, Dave was a physics student at New York University (NYU) and was asked to give a presentation to an English-major class. When wind blew his papers away they landed before Becky. They soon recognized each other and Dave blamed his strange acts to hallucinations. After the class, Dave helped fix the antenna in the radio station Becky was working in which saved her show, and left. While listening to her show, Dave eventually discovered that his Tesla Coils were making their own music all along when they played together with a song on the show.

When having dinner with Balthazar Blake outside the Radio Station, Dave saw Becky walk out after her show and decided to "stalk her, but not in a bad way". He commented on her show while they entered a subway station, and soon Becky was mugged by a thief on the platform. Dave used his magic to defeat the thief and returned Becky's belongings to her, claiming that he beaten the man up using "Thunder/Lightening" via cardio boxing he was doing lately, and she noticed something about him which was different. Before Becky boarded her train she planned an actual study session with Dave at his lab.

While Dave was training with Balthazar in his lab, Becky arrived and Balthazar eventually left the two alone in the lab. After studying, Dave showed Becky his Tesla Coils making their own music, then played the segment he recorded with the song on Becky's radio show earlier. Later Dave walked Becky to her yoga class in NYU while the two talked more about music, and they fixed a meeting at Dave's lab at 8 pm that evening.

At 8pm that evening, Becky arrived at Dave's lab, but he asked her to leave as he was "having issues" (having trouble with his Cleaning Spell in his lab). When Dave soon left Balthazar in frustration, Becky followed Dave when she saw him outside a coffee shop through the window reflection looking more distressed than ever, and the two ended up on the rooftop of the Chrysler Building. She reassured Dave that he was doing the right things and that he saw the world in his own way.

After Maxim Horvath released the legendary American witch Abigail Williams from the Grimhold, she arrived at Becky's radio show in her disguise as somewhat of a Goth girl with tied, long hair and a leather jacket then asked for a song request. As Becky was just about to finish her show she refused and invited the girl to maybe do it next time. When Becky turned around she jumped seeing Abigail Williams' actual looks, stating, "I said I'd like to make a request". Becky was then kidnapped and taken to Horvath. Eventually he used her to threaten Dave to hand over both Merlin's Dragon Ring and the Grimhold. Dave had no choice but to follow, saving Becky's life. Becky soon witnessed in shock Balthazar falling off the building backwards and flying away on a Steel Eagle, and Dave was finally forced to reveal to her his true identity as a wizard.

Dave wanted Becky to stay out as The Rising was really dangerous, but she wanted to come with him, so Dave let her, saying, "You're sexy". After they return to the lab to retrieve a Tesla Coil (and remote) then attach it to Balthazar's car, The Rising began when they were driving to Battery Park and Dave realized that it was being facilitated by the Satellite Dishes on the tops of the nearby buildings. So he asked Becky to climb onto one of the building tops to disrupt a Satellite. She agreed with a bit of fear and before they departed Dave asked Becky about the note he wrote to her in 4th grade which he never saw "in case I die tonight", which she replied, "Don't die and I'll tell you". Soon she reached the top of the building and climbed onto the Satellite Tower, but due to her fear of heights she could only kick the Satellite Dish as she hung in mid-air. Eventually Becky picked up her courage and kicked the Dish sideways, ending The Rising just in time.

When Morgana le Fay was defeated and Dave successfully restarted Balthazar's heart, reuniting him with Veronica, Becky ran into the park and she embraced Dave. Becky acknowledged that she was still alive which Dave replied, "And, surprisingly, so am I". She proceeded to tell Dave about the note but Dave kissed her immediately after saying "I don't care". Soon Becky revealed that it was "Girlfriend, definitely girlfriend". In the end Dave took Becky to breakfast in France on Balthazar's Steel Eagle ("Yeah, I got us a ride."), and he also revealed that he had "no idea how to land this thing".

Becky Barnes was a laid-back, down to Earth kind of person, who loved music. She had her own college radio show. Becky had a good sense of humor, and a mild temperament. When Dave was talking to her on the roof, she reminded him of his act of lining up a doodle of King Kong with the Empire State Building through the school bus window, saying that it was cool. He replied that he was just trying to impress her, and Becky reassured him that he succeeded. Becky had a fear of heights, which she overcame in the end of the film by climbing to the top of a building then up a tower and moving a satellite dish in mid-air, thwarting Morgana le Fay's sinister plan.

Becky is a beautiful young woman in her late teens. She has a slender build and is 167 cm (5'5½") tall. She has blonde hair and green eyes. 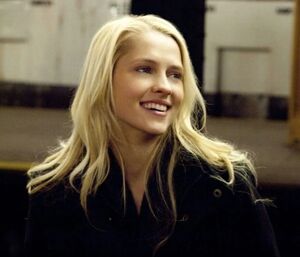 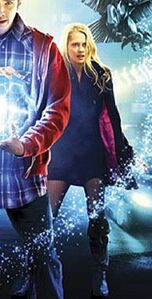 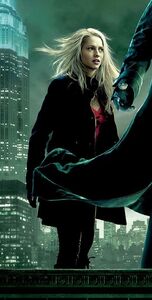 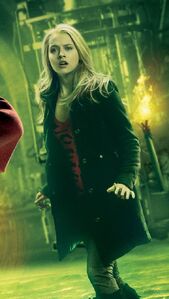